Midterms are a chance to restore ‘sanity’ to US politics - Obama

‘If we don’t step up, things can get worse,’ says former US president during speech

Former US president Barack Obama has appeared at his first campaign event for the midterm elections set for November, rallying up a large crowd in California, where he said that it was time to inject "sanity" back into politics. 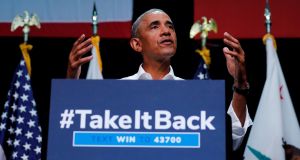 Former US president Barack Obama has said the upcoming US midterm elections give Americans “a chance to restore some sanity in our politics”, taking another swipe at his successor Donald Trump.

Mr Obama has been back on the campaign trail as he bids to help fellow Democrats regain control of the House in November.

He did not mention Mr Trump by name during a 20-minute speech in the key Southern California battleground of Orange County, but the allusions were clear.

His appearance — one day after a strongly worded critique of Mr Trump at University of Illinois at Urbana-Champaign — touched on themes of retirement security, climate change and education.

“If we don’t step up, things can get worse,” the former president told the audience at the Anaheim Convention Centre.

But California Republicans said Mr Obama’s appearance would have little impact, and may even help their party.

“I wish he would come more often because he reminds Republicans of eight years of misery,” said Republican national committee member Shawn Steel.

“It reminds the Republicans why these midterms are important.”

Mr Obama is expected to deliver a similar message in another campaign speech in Cleveland on Thursday. – AP