Donald Trump calls for delay to US presidential election 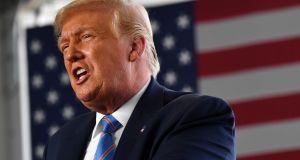 US president Donald Trump: “Delay the Election until people can properly, securely and safely vote???” he tweeted. Photograph: Nicholas Kamm/AFP via Getty Images

US president Donald Trump has suggested that November’s presidential election should be delayed, citing unsubstantiated concerns about postal voting.

With just over three months to the election, Mr Trump tweeted on Thursday: “With Universal Mail-In Voting (not Absentee Voting, which is good), 2020 will be the most INACCURATE & FRADULENT Election in history. It will be a great embarrassment to the USA. Delay the Election until people can properly, securely and safely vote???”

The date of the US election is set in statute. The election must take place every four years on “the Tuesday next after the first Monday in the month of November.”

Additionally, the US Constitution gives Congress – and not the president – power to regulate elections. The election must take place every four years on “the Tuesday next after the first Monday in the month of November”.

Mr Trump has repeatedly questioned the reliability of postal voting, a method of voting that is likely to be more widely used in most states in this election cycle. Several states are preparing to expand such voting in November’s presidential election due to coronavirus.

“Because of MAIL-IN BALLOTS, 2020 will be the most RIGGED Election in our nations history – unless this stupidity is ended,” Mr Trump wrote earlier this month. “We voted during World War One & World War Two with no problem, but now they are using Covid in order to cheat by using Mail-Ins!”

Several states – including New York and New Jersey – have reported problems with postal voting in recent weeks, though there is no evidence to suggest that absentee voting is less safe than traditional voting.

Mr Trump previously threatened to withdraw federal money from states that offered postal votes to all their citizens.

With Universal Mail-In Voting (not Absentee Voting, which is good), 2020 will be the most INACCURATE & FRAUDULENT Election in history. It will be a great embarrassment to the USA. Delay the Election until people can properly, securely and safely vote???

Mail-In Voting is already proving to be a catastrophic disaster. Even testing areas are way off. The Dems talk of foreign influence in voting, but they know that Mail-In Voting is an easy way for foreign countries to enter the race. Even beyond that, there’s no accurate count!

Senior Republicans rejected Mr Trump’s suggestion, saying the election should be held as planned even as they mostly backed his concerns about mail-in voting.

Senate majority leader Mitch McConnell told television journalists from his home state of Kentucky that the election would go ahead as scheduled, and House Republican leader Kevin McCarthy rejected the suggested delay out of hand.

“Never in the history of the federal elections have we ever not held an election, and we should go forward with our election,” Mr McCarthy, a Trump ally, declared at a news conference.

Mr McConnell, in an interview with WNKY-TV that was excerpted on Twitter, noted the US had always held its elections on time, through wars and economic downturns. “We’ll cope with whatever the situation is, and have the election on November 3rd as already scheduled,” Mr McConnell said.

Senator Lindsey Graham, another Trump ally, told reporters: “I think his concerns about mail-in voting are valid, but delaying the election is not the right answer.

“I think we can be able to safely vote in person in November. I think delaying the election probably wouldn’t be a good idea.”

Mr McCarthy said he understood Mr Trump’s concern about the integrity of mail-in voting, distinguishing it from absentee voting that he said can be easily traced and confirmed.

“If you just mass-mail ballots out, people have moved, voter rolls are not updated, and that’s where you have real problems in elections,” Mr McCarthy said. “That’s what the president’s talking about, he’s not talking about absentee voting.”

Democrats responded with outrage at the suggestion of a delayed election. Michigan congressman Dan Kildee tweeted: “A sitting President is peddling lies and suggesting delaying the election to keep himself in power. Don’t let it happen. Every American – Republican, Independent and Democrat – should be speaking out against this President’s lawlessness and complete disregard of the Constitution.”

Mr Trump’s tweet was sent shortly after new economic figures were released showing that GDP fell by 9.5 per cent in the second quarter of the year, bringing the annual rate of decline to 32.9 per cent – the steepest economic decline since the 1940s.

The suggestion that the election should be delayed comes as polls show that Mr Trump is trailing his Democratic rival Joe Biden nationally and in swing states.

In a posthumous opinion piece published in the New York Times ahead of his funeral on Thursday in Atlanta, the late congressman John Lewis called on Americans to exercise their right to vote.

“Voting and participating in the democratic process are key” to the soul of America he wrote. “The vote is the most powerful nonviolent change agent you have in a democratic society. You must use it because it is not guaranteed. You can lose it.”

Former president Barack Obama is due to deliver the eulogy at the funeral of Mr Lewis, which will also be attended by former presidents George W Bush and Bill Clinton. Mr Trump confirmed this week that he would not be paying his respects to Mr Lewis, who was lying in state earlier this week in the US Capitol in Washington. Additional reporting: Reuters