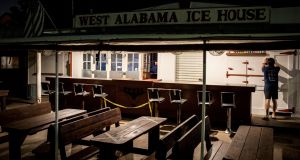 Employees close down a bar in Houston last month after during a partial re-closing of Texas. The coronavirus has infected at least 4.3 million people in America, killing almost 150,000. Photograph: The New York Times

The death toll from coronavirus in the US has reached 150,000 — by the far the highest in the world, according to the tally kept by Johns Hopkins University.

The bleak milestone comes amid signs that the nation’s outbreak is beginning to stabilise in the Sun Belt but heating up in the Mid-west, fuelled largely by young adults who are visiting bars, restaurants and gyms again.

California, Florida and Texas, the three largest US states, all set one-day records for fatalities from Covid-19 on Wednesday

US congressional Republicans and Democrats, struggling to reach a deal to provide more aid to those hurt by the pandemic, slid on Wednesday toward letting a $600-per-week unemployment benefit lapse when it expires this week.

The surge in cases has been accompanied by a burgeoning outbreak of misinformation and conspiracy theories about supposed cures and the effectiveness of masks.

Brazil on Wednesday reopened international air travel to foreign tourists, which had been banned since March.

Johns Hopkins put the nation’s confirmed infections at nearly 4.4 million, also the highest in the world, though the real numbers in the US and around the globe are believed to be higher because of limits on testing and the many mild cases that have gone undetected or unreported.

More than 17.05 million people have been reported to be infected by the novel coronavirus globally and 666,411 have died, according to a Reuters tally. Infections have been reported in more than 210 countries and territories since the first cases were identified in China in December 2019. – Agencies