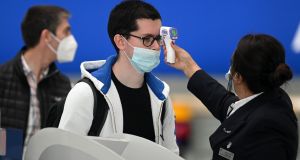 At least 30 Conservative MPs are to increase pressure on the British government to reconsider its approach to the 14-day quarantine rule for travellers from at-risk countries, amid warnings that more European countries with Covid-19 spikes could have the restrictions reimposed.

Concerned MPs are co-ordinating an approach to the prime minister this week in order to urge Boris Johnson to cut the two-week time-frame for isolation with the use of mass testing.

Henry Smith, the MP for Crawley, which includes Gatwick Airport, said tests could help cut quarantine to seven days, coupled with a more regional approach based on where cases of the virus were rising.

“Cutting down a week makes a big difference, that could be a way to satisfy the paramount public health concerns and still allow travel to continue to a large degree,” he said.

Oliver Dowden, the culture secretary, said on Wednesday that ministers believed there was “no viable” alternative to the quarantine period.

“It’s not a silver bullet so you can test negative initially and then the virus can incubate and you can spread,” he told LBC.

However, senior Conservative and Labour MPs, as well as the chief executive of Heathrow, John Holland-Kaye, pointed to airport testing systems used in other nations that could play a part in shortening the isolation time for returning travellers.

Quarantine restrictions on travellers returning to England from Belgium and Luxembourg may be reimposed in the next two days, as ministers grapple to contain any fresh threat from a potential second wave of coronavirus in some European countries.

Ministers are understood to be closely monitoring rises in the number of infections in Belgium and Luxembourg, as well as in Croatia.

“Vienna has been doing this for months. I don’t understand why we haven’t,” he wrote on Twitter. “Nothing is perfect, you are as likely to catch the virus on the London underground back home as you are on the plane or on holiday.”

Theresa Villiers, a former aviation minister, said MPs were urging the department for transport to find a better solution than the two-week isolation period, even though testing alone was unlikely to be the answer.

“I know colleagues are urging DfT to get this done but I fear it may not be in time to save this summer’s holidays,” Ms Villiers said. “I hope that testing might be deployed to reduce quarantine periods but I’m not sure testing is a complete substitute. The big problem is that getting either approach in place for regionalised quarantine and a new airport testing regime to reduce the quarantine period will take time.”

Scientists have cautioned that mass testing at airports is unlikely to prevent the need for quarantine measures as the incubation period for the virus could be up to five days before a test can detect if someone is positive.

Modelling done by the London School of Hygiene and Tropical Medicine found testing on arrival may only catch around 50 per cent of cases – but combined with a seven-day quarantine with a test on the final day, that rate could reach 94 per cent and cut the quarantine period by one week.

Mr Dowden said people should “should continue to book holidays, but just bear in mind that [fresh quarantines] may happen, and sadly it has happened in Spain”.

He said he understood people’s anxiety and frustration about where might be next. “Believe me, from friends and family and people I meet on the street, everyone is asking this question,” he said.

The Covid-19 rate has almost tripled in Belgium this month, from 5.3 to 15.1 per 100,000 of the population, with the number of cases up from 615 to 1,751, leading to a crackdown on numbers of people allowed to socialise. Luxembourg’s rate of infection is 15 times higher per capita than in the UK.

A 14-day quarantine, similar to those reimposed on tourists returning from Spain last weekend, could be reintroduced later this week for travellers arriving in England from those countries if the trajectory of new cases continues, though it would be up to the devolved administrations to decide whether to follow suit.

Croatia’s tourist board issued a statement on Wednesday saying the country was still “extremely safe” for tourists and said increased numbers of cases had been largely in the far eastern regions of Croatia, away from the popular coastal areas populated by tourists.

The rise in cases was linked to a number of large-scale events, tournaments, large weddings and family gatherings, and new restrictions were now in place, the tourist board said. – Guardian