How safe is air travel during the coronavirus pandemic? 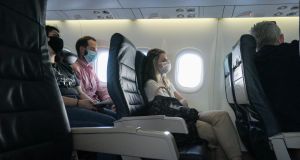 As airlines rush to return their fleets to the skies, the industry is battling to restore confidence among travellers that flying in an enclosed aircraft with hundreds of people is not as risky as it may seem.

Over the past month, the aviation industry – from carriers, to aircraft manufacturers, to airports – has stepped up its campaign to address safety concerns about the spread of coronavirus as it looks to recover from the worst crisis in its 100-year history.

“All the data we can look at tells us that aeroplanes are less of a risk than any equivalent public place [such as] bus, train, restaurant or a workplace,” said Dr David Powell, medical adviser at Iata, the airline global trade body.

But he admits the sector faces a “widespread perception that airliners are a dangerous place”.

The fear stems from aircraft being confined spaces where people, sometimes from different countries, are close to each other for long periods – all factors that increase the danger of catching coronavirus, according to scientific studies.

An industry-commissioned survey of 4,700 air travellers highlighted this concern. According to Iata, 65 per cent of those interviewed said their biggest concern was sitting next to someone who might be infected. About 42 per cent listed using the toilet, while 37 per cent said they were worried about breathing the air in the plane.

But experts point out that the distinctive features of aircraft ventilation systems could reduce the hazards. The “replacement rate” – the number of times a volume of air equivalent to the volume of the cabin is removed each hour – is very brisk.

This turnover time can be as little as three or four minutes in an aircraft, compared with 20 or 30 minutes in an indoor environment on the ground, said Shaun Fitzgerald, Royal Academy of Engineering visiting professor at the University of Cambridge.

While this does not mean every gas molecule in the environment is removed every few minutes, the airflow it creates potentially reduces significantly the risk of exposure to high virus concentrations over long periods.

Another crucial factor is that air recirculated through the aircraft cabin goes through air-conditioning systems with far more sophisticated and effective filters than those generally found in indoor venues on the ground.

These so-called HEPA-filters – designed for environments where high air quality is essential – have been found in previous studies to remove almost all particles of the typical size of coronavirus.

“Most everyday A/C systems don’t operate at high air replacement rates – and they don’t have HEPA filters because they don’t need them,” Fitzgerald said.

Both Airbus and Boeing have advised airlines to keep the ventilation system running when passengers are boarding and disembarking to minimise the risk further – a practice not widespread before Covid-19.

Other factors could also lessen virus transmission. Seat-backs help block the path of respiratory droplets exhaled through mouths and noses. Passengers also tend to stay in their seats and not spend long periods in different parts of the cabin, reducing the risk that they will spread the pathogen to multiple groups of people.

Some airlines, such as Ryanair, have said passengers will need to ask permission to go to the toilet and many have cut back food and drink service to limit interaction between crew and passengers.

“It’s a very disciplined environment, people are used to standing in queues and sitting where they are told,” said Ashley Woodcock, professor of respiratory medicine at University of Manchester. “You can make it more disciplined relatively easily.”

So far there has been little evidence of in-flight transmission of coronavirus. A flight from the US to Taiwan in March, where 12 people were later confirmed to have been symptomatic at the time of flight, generated no secondary confirmed cases among the 328 other passengers and crew members.

A more in-depth survey of four carriers which looked at flights carrying about 125,000 passengers – of whom 1,100 were identified as confirmed cases – identified one possible secondary passenger case and two crew cases.

However, there are exceptions. An investigation into a flight from the UK to Vietnam in March suggested one passenger infected up to 14 others – 12 of whom were seated nearby.

Jim Haas, director of product marketing at Boeing, said that while there had been a “few” cases of potential onboard transmission, in the context of the thousands of flights this year, the risk was still low.

But scientists say the evidence on aircraft coronavirus transmission is still thin and it is possible studies will emerge that flag more concerns.

While social distancing on an aircraft would reduce the risk of transmission further, according to scientists, there are few carriers – apart from some in the US – that are planning to leave middle seats empty because it would mean they would struggle to turn a profit. There has also been no requirement by aviation authorities such as the European Union Aviation Safety Agency, the US Federal Aviation Administration or the UN-agency ICAO to make social distancing mandatory on-board.

Airlines have introduced other safety measures, such as mandatory face masks for passengers and crew, enhanced cabin cleaning and changing boarding and in-flight processes to reduce interpersonal contact.

Some airlines and airports are looking at introducing Covid-19 tests to provide further reassurance and in a bid to open up important routes, such as the lucrative transatlantic market.

Aircraft manufacturers are also investigating other ways to improve safety. Boeing is looking at new materials such as antimicrobial coatings or surfaces that would kill any virus that lands on them. These materials could be used on equipment installed by the aircraft maker – such as in the toilets.

It is also developing a portable Ultraviolet disinfector which Haas says could be available “in a year or so”. Designed as a backpack with a handheld UV wand, airline staff could wave the light over the area to be disinfected and any virus would be killed “in seconds”, he said.

Sir Tim Clark, president of Emirates Airline, said: “There is no silver bullet that offers a 100 per cent guarantee against contracting Covid-19, or any other infection for that matter, short of putting people in a bubble from the moment they leave their homes. It’s impossible to entirely eliminate risk, but collectively all these measures help further reduce risk of exposure and transmission.”

Dr Julian Tang, a consultant virologist at the Leicester Royal Infirmary, said that because of the effectiveness of the aircraft’s ventilation system, the risk really comes from how close people are when they are talking to cabin crew or to each other.

He said there were small things passengers could do to limit their exposure. “If I had to fly, I’d go on with a mask and I’d try and eat when no one else is eating. Things like that can help stagger the risk a bit.” – Copyright The Financial Times Limited 2020