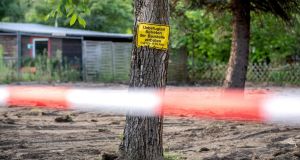 A sign on a tree reading “No entry to the property. Parents are liable for their children” after police finished a two-day search in a garden allotment near the German city of Hanover on Wednesday. Photograph: Hauke-Christian Dittrich/AFP via Getty Images

German police searching an allotment plot used by the prime suspect in the disappearance of Madeleine McCann have reportedly found a cellar once believed to have belonged to a garden house that was torn down at the end of 2007.

German media have been reporting on the apparent development, though police have yet to comment.

Two small excavators were used to dig up the plot on the outskirts of the north German city of Hanover, which was once used by the 43-year-old main suspect in the abduction of the three-year-old British girl in 2007.

The two-day search of the site ended on Wednesday.

The suspect reportedly lived there during 2007, a former neighbour told local media. He said he had lived off grid and had left within a year.

The operation, which involved a large team of police officers, forensic specialists and sniffer dogs, began in the early hours of Monday morning.

They dug up the plot, using spades and rakes to comb over the ground. Big slabs of building materials were also removed apparently from the remains of the foundation of the garden house.

The cellar was reportedly discovered on Wednesday morning.

One allotment tenant next to the plot told the newspaper Bild the cellar had belonged to the plot “for many years” and had been added by a previous tenant. It was not filled in when the summer house attached to it was torn down at the end of 2007, he said. It is not clear who tore the house down.

Police sealed off the area, and added extra non-transparent screening on Wednesday, according to reporters at the scene. Police confirmed reports that they had shut the air space over the area they were searching, to prevent helicopters and drones from observing from overhead.

The police have not revealed what it is they were hoping to find. But a spokeswoman for state prosecutors in Braunschweig who are leading the investigation and working alongside Germany’s federal criminal police confirmed that the search was taking place as part of its investigation into the disappearance Madeleine in Portugal in 2007.

As part of their investigation, just weeks ago, police searched an abandoned factory property in the neighbouring state of Saxony-Anhalt in which the suspect is also believed to have lived, and uncovered thousands of images on video tapes and USB sticks buried there, including images of child sexual abuse.

Earlier this month Portuguese police and divers searched three wells in the area of Vila do Bispo on the Algarve. They said they found no evidence there.

Hans Christian Wolters, the head state prosecutor in Braunschweig, has repeatedly said in statements and interviews that investigators have concrete evidence that the suspect – who was living in Praia da Luz when Madeleine was staying in the Algarve town with her family – was involved in her disappearance. He has also said he believes the British girl is dead, but has so far declined to give more details.

The allotment lies in the rural region between Hanover Ahlem and Seelze-Letter and is about 65km from Braunschweig. The suspect is serving a prison sentence in the city of Kiel for drug trafficking. He was confirmed as a main suspect in the disappearance last month.

He lived in the Algarve between 1995 and 2007 and has two previous convictions for sexual contact with girls, one for the rape of a 72-year-old American woman, and numerous other convictions for theft and fraud.

He was found guilty last December of the rape of the American woman in Praia da Luz in 2005, but is appealing against the sentence in the European Court of Human Rights. A ruling is expected within days. His current prison term is due to expire in January. – Guardian