How Donald Trump acts as a restraining influence on Mike Pompeo

US Politics: President’s materialism is in contrast to moral imperatives of his secretary of state 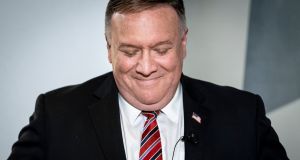 Here follow some excerpts from a speech about China by Mike Pompeo last week. The US secretary of state chose as his setting Richard Nixon’s presidential library in California, whether in honour or repudiation, it was not always clear.

“The free world must triumph over this new tyranny”; “the sweet appeal of freedom itself”; “freedom-loving nations of the world”; “the free world is still winning”; “it’s time for free nations to act”. Perhaps fearing that he had buried the lede, Pompeo named the speech itself “Communist China and the Free World’s Future”.

Now, resist for a moment the cry of double standards. To judge by the administration’s foreign policy, “free” nations include Saudi Arabia and Russia. Set aside, also, that jarring venue. China was not free when Nixon, the dry realist, employer of Henry Kissinger, enlisted it as a counterweight to the USSR. Nor did the Soviets’ unfreedom stop him seeking a detente with them.

There is a presidential mouth in which the “F”-word is even harder to imagine. It just happens to belong to Pompeo’s boss. For all his animosities with other countries, Donald Trump tends not to mind their internal doings. The US president regards China as a trade malefactor and a usurper of his own nation’s primacy. That it is also authoritarian does not – though it is hard to verify these things – seem to disturb his sleep. His previous villain, the economic rival that was 1980s Japan, was a pacifist democracy.

It matters that Trump and his secretary of state have radically different world views. The president is transactional. Pompeo moralises. Trump’s grievance with China stops at economics and power politics. Pompeo goes further and rejects its governing values. For Trump, another nation’s treatment of religious minorities is by the by. For Pompeo, a former deacon, it seems personal.

Among his first acts at the state department was to host a now annual gathering on religious freedom. He also set up the Commission on Unalienable Rights. Under the president, the US-China schism has been vicious but practical. If Pompeo now sets the tone, it promises to be a clash of belief systems. And all the harder to finesse.

It matters, too, that Pompeo seems so ascendant. Over his tenure, the administration’s rhetoric against China has widened from the specificities of trade to points of principle. Brute, commerce-minded nationalists, such as Rex Tillerson, Pompeo’s predecessor, have made way. He is also helped by the weakness and domestic distraction of a boss who is doing poorly in the polls. Authority, as Alfred Tennyson wrote, forgets a dying king.

But Pompeo’s advantage runs deeper than that. He taps into a moral dualism in Washington, a belief in clearly delineated good and bad, that survives any misadventures it might inspire. Even the fiasco of Iraq (a war that was sold on appeals to freedom) only held it back for a while. It would take an Alexis de Tocqueville, or perhaps a Sigmund Freud, to divine where it comes from, this craving for a black-and-white picture of the world. Maybe a young nation finds its sense of self in opposition to something else.

Either way, Trump’s election in 2016 was as much a rejection of this righteous militancy as of effete “globalism”. Of those two impulses, the first has proved the harder for him to overcome. It is as much the way of the Washington establishment as international summitry and free-trade. Remember that Pompeo, a former intelligence chief and congressman, a graduate of the West Point military academy and Harvard Law School, is no outsider to the system.

At one point, his speech looked back to the cold war. “And if there is one thing I learned,” he said, “communists almost always lie.” You half-expect a swipe at the fluoridation of tap water, evoking General Jack D Ripper in Dr Strangelove. But such moral absolutes are not rare in Washington.

The question is no longer whether the US should be more vigilant on China than it has been. That debate has been settled in the affirmative, and with some justice. The question is whether it is to be a rift over earthly interests or stray into first principles. The one is more negotiable than the other.

We are used to the idea of Trump as a force to be contained by more rational subordinates. It is the theme of almost every insider memoir about the administration. In his materialism, though, his reluctance to build a foreign policy on moral abstractions, perhaps he is a restraining influence on them, too. There are worse traits in a world leader than cynicism. – Copyright The Financial Times Limited 2020