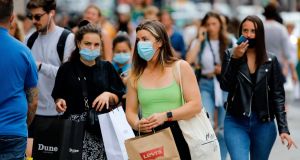 The UK government has increased to 10 days the length of time people with coronavirus symptoms must self-isolate, as it seeks to prevent the surge of cases seen in some parts of Europe and contain infection numbers ahead of a potentially difficult winter.

Under the previous guidance anyone with symptoms, including a “new, continuous” cough or high temperature, had to stay at home for seven days. Everyone living in their household had to isolate for 14 days.

The changes were announced as data from the Office for National Statistics painted a grim picture of the toll the disease had taken in England. While the country did not have the highest peak mortality, it had “the longest continuous period of excess mortality of any country compared, resulting in England having the highest levels of excess mortality in Europe for the period as a whole”, the statisticians concluded.

In a statement on Thursday, the chief medical officers for England, Scotland, Wales and Northern Ireland, said people with Covid-19 were “most infectious just before, and for the first few days after, symptoms begin”. However evidence, although still limited, “has strengthened and shows that people with Covid-19 who are mildly ill and are recovering have a low but real possibility of infectiousness between seven and nine days after illness onset”, the CMOs said.

With widespread and rapid testing available “and considering the relaxation of other measures, it is now the correct balance of risk to extend the self-isolation period from seven to 10 days for those in the community who have symptoms or a positive test result”, they added.

Officials suggested no dramatic new scientific evidence had lately come to light to spur the change in instructions but they made clear there was anxiety about developments elsewhere in Europe, where infections have spiked in some countries in recent days.

In their announcement, the CMOs - England’s Chris Whitty, Northern Ireland’s Michael McBride, Scotland’s Gregor Smith and Wales’ Frank Atherton - said the 10-day period would “help provide additional protection to others in the community . . . particularly important to protect those who have been shielding and in advance of the autumn and winter when we may see increased community transmission”.

The latest figures for the government’s test and trace service showed 4,128 new people tested positive for Covid-19 in the period beginning July 16th, up from 3,953 the week before. Officials said infection rates were “broadly stable” but acknowledged they were no longer going down. Government officials said the data emerging from other countries had fuelled ministers’ fears over a second wave.

“A big part of it is what we are starting to see in other countries who have opened up”, said one. “The numbers in Spain have been mad”, they added, noting high levels of concern in government “over the fact we are seeing these infection rates when it’s the summer. If these are the numbers now, what’s it going to be like when we hit the winter?”, queried the aide.

On Thursday evening the government launched an advertising campaign to encourage people with symptoms to get a test “and [make] them aware of the need to respond to the service if contacted”, the health department said.

Under a new business plan for the service, the number of tests given to people without symptoms will increase to 150,000 per day by September, with overall testing capacity to double from current levels to 500,000 and more than 500 testing sites by October. The government also expects to launch a new version of its contact tracing app by the winter, after work was stopped on an earlier version in June.

Speaking on a visit to Yorkshire, UK prime minister Boris Johnson highlighted a resurgence of the virus in some other European countries and in the US, where the number of cases this week surpassed 4 million.

“It is absolutely vital as a country that we continue to keep our focus and our discipline, and that we don’t delude ourselves that somehow we are out of the woods or that that is all over because it isn’t all over”, the prime minister said.

Peter Openshaw, a member of the New and Emerging Respiratory Virus Threats Advisory Group, which makes recommendations to the government, said most coronavirus transmission occurs “at the time of symptoms developing, possibly for two days before” so a 10-day isolation period was a “safer margin”. – Copyright The Financial Times Limited 2020