US federal agents to begin withdrawing from Portland after clashes 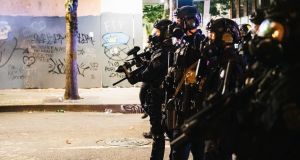 Federal agents will begin to withdraw from Portland, Oregon, after clashes with protesters drew attention around the world, the US department of homeland security announced on Wednesday.

Kate Brown, Oregon’s Democratic governor, said agents would begin a “phased withdrawal”, with the first wave leaving the central area of the city on Thursday.

Chad Wolf, acting DHS secretary, said in a statement that the department had negotiated a plan with Ms Brown over the previous 24 hours. There would remain a “robust presence” of Oregon State Police in downtown Portland, Mr Wolf said.

“State and local law enforcement will begin securing properties and streets, especially those surrounding federal properties, that have been under nightly attack for the past two months,” Mr Wolf said in a statement. He added that Oregon’s police would co-ordinate with federal officers to “ensure all federal facilities remain protected and secure”.

For weeks in downtown Portland, Oregon’s largest city, federal forces have used tear gas and rubber bullets to disperse demonstrators, some of whom have used fireworks and high-powered lasers. President Donald Trump has sent more than 100 DHS and US Marshals Service officers into the city over the objections of local and state leaders.

Residents in the majority-white city, which has a reputation for progressive politics and a long tradition of vocal protest, have reacted with outrage to the federal officers.

On Tuesday William Barr, US attorney-general, defended the actions of the Trump administration in Portland during an appearance before the Democratic-controlled House of Representatives judiciary committee, denouncing the demonstrations at US northwest city’s federal courthouse as driven by “violent rioters and anarchists”.

“Since when is it okay to try and burn down a federal court?” he told the committee. He insisted federal forces deployed to Portland were simply “defending the courthouse. We’re not out looking for trouble.”

Mr Trump insisted on Wednesday that federal troops would not leave Portland until local authorities “secured their city”.

“We told the governor, we told the mayor: ‘Secure your city.’ If they don’t secure their city soon, we have no choice - we’re going to have to go in and clean it out. We’ll do it very easily. We’re all prepared to do it,” he said.

The president later tweeted: “If the federal government and its brilliant law enforcement (Homeland) didn’t go into Portland one week ago, there would be no Portland – it would be burned and beaten to the ground.”

Even as the Trump administration moves to reduce its presence in Portland, it announced that it would send federal agents into three more US cities – Detroit, Michigan; Cleveland, Ohio; and Milwaukee, Wisconsin – as part of an operation to quell what the president has described as a “rampage of violence”.

Agents had already been sent to Chicago, to Kansas City, Missouri, and to Albuquerque, New Mexico, as part of that operation.

Mr Trump has attempted to portray Democratic-controlled cities as bastions of lawlessness as he pitches himself to voters as the law and order candidate in a tight presidential re-election battle. Most polls show his Democratic rival Joe Biden ahead in the race. – Copyright The Financial Times Limited 2020