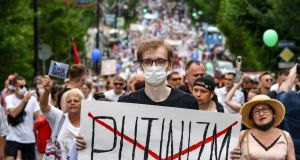 People march in the eastern Russian city of Khaborovsk at the weekend in protest against the Kremlin’s dismissal of regional governor Sergei Furgal. Photograph: Igor Volkov/AP

If Russian president Vladimir Putin was hoping for a political honeymoon after successfully rewriting the country’s constitution to potentially give him two more terms in office, he was mistaken.

Just 10 days after winning a popular vote designed to depict the country as united behind its leader, protests erupted that instead demonstrated the level of simmering popular discontent. They also underscored the gulf between the president’s Kremlin and many ordinary citizens after his more than two decades in power.

Last weekend more than 20,000 people took to the streets of Khabarovsk, a city in Russia’s far east on the border with China, in support of the former state governor who was dismissed by Putin earlier this month and charged with attempted murder.

The protests – the largest ever seen in the city – have continued daily since July 11th, two days after Sergei Furgal, who is not from Putin’s ruling United Russia party, was arrested, flown to Moscow and detained.

Since then, the protesters’ demands have morphed from the local to the national: from demanding a fair trial for Furgal to calling for Putin to step down.

They have intensified since the Kremlin dispatched Mikhail Degtyarev, a lawmaker from Moscow with no local experience, to replace Furgal, enraging citizens who viewed the governor’s sacking as the Kremlin ignoring local wishes. “This is our region,” protesters chanted on Monday evening.

The protests, spanning an unprecedented 18 consecutive days unhindered by local police, have left Putin looking detached and listless in contrast to his usual decisive and hands-on image.

His response has divided political observers, between those who believe it illustrates an aloofness and lack of interest in what he views as a minor problem in a region 6,000km east of Moscow, and others who suggest he misread the scale of public anger, is now powerless to act and hopes the protests will simply peter out.

“The Kremlin has forgotten how to politically respond to issues like this. They are losing their ability to respond to societal discontent,” said Tatiana Stanovaya, founder of political analysis firm R. Politik.

Under Putin, the government has sought to maintain a strong grip on regional administrations. Fifty-nine of Russia’s 85 local governors are from United Russia and only a handful of the remainder are true independents elected with genuine local support.

Russia’s president has the power to appoint and dismiss regional governors, who must then be directly elected.

“[Governors’] main qualities are they must be loyal to the Kremlin and not too popular, but at the same time popular enough to be quite efficient,” said Andrei Kolesnikov, senior fellow at the Carnegie Moscow Center.

Furgal is a member of the ultranationalist Liberal Democratic party (LDPR). He defeated the Kremlin-approved candidate in the region’s September 2018 gubernatorial election in a shock outcome driven by an anti-establishment vote that also saw United Russia win just two of the 36 seats in the region’s parliament.

So far, the protests in support of Furgal have been confined to Khabarovsk and a handful of other towns in eastern Russia. State-run media has either ignored them or sought to portray them as dangerous gatherings that will lead to a spike in Covid-19.

Last weekend, as tens of thousands marched through the city centre, Russian state TV news instead ran features on protests in Portland in the US.

But the public anger comes at a difficult time for Putin, whose 78.6 per cent support in the constitutional referendum was marred by allegations of voter fraud and irregularities.

The president’s approval rating sank to a record low in April after years of falling real household incomes and a stagnant economy. The coronavirus pandemic has shut down much of Russia’s economy since March and is set to lead to a 6 per cent fall in gross domestic product this year, according to the World Bank.

With parliamentary elections scheduled for next September, the current administration, in which United Russia has a supermajority, has a net approval rating of minus 12 per cent.

“In general, governors are now becoming more popular – from the point of view of approval ratings – than Putin,” said Kolesnikov.

Furgal’s election was “a unique situation when people did not vote for [the ruling party] and got good results,” he said. “That’s why they defend their choice. But we cannot extend this quality to any Russian region,” he said, adding that many provinces still voted for United Russia, with little sign of a desire for change.

Furgal is in Moscow awaiting trial for his alleged role in the murders of businessmen in 2004 and 2005. His supporters claim the charges, which Furgal denies, are politically motivated. Degtyarev, a fellow LDPR member, has called for a fair and open trial.

The newly appointed governor on Tuesday called for the protests to stop and blamed them on “professional provocateurs who flocked to these events from all over the country” rather than “righteous anger” from local residents.

“Everything is ethical, I am in harmony with my conscience,” Degtyarev said of his appointment. “I took the president’s proposal with great enthusiasm and did not think for a single second.”

Putin’s spokesman said this week that he believed the protests “seem to be calming down”.

But analysts said that the local nature of the demonstrators’ demands meant the movement was more galvanised and determined than previous national protest campaigns against issues such as government corruption, and bore similarities to protests in Moscow last summer against the arrest of a journalist, who was later released.

“Society is beginning to impose itself on the Kremlin,” said Stanovaya, “rather than it being the other way around all the time”. – Copyright The Financial Times Limited 2020