Barr defends Trump decision to send troops into US cities 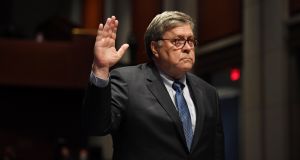 US attorney general William Barr defended the Trump administration’s decision to send federal agents to Portland, Oregon, as he appeared before the House of Representatives judiciary committee at a highly charged hearing on Tuesday.

Mr Barr, who has been accused by Democrats of pandering to US president Donald Trump’s demands, clashed with Democrats on the committee as he faced his first congressional questioning since the outbreak of the anti-racism protests almost two months ago.

“Violent rioters and anarchists have hijacked legitimate protests to wreak senseless havoc and destruction on innocent victims,” Mr Barr said, defending the administration’s decision to deploy federal troops to cities including Washington DC, Portland and Seattle as a response to anti-racism demonstrations.

He said officers had a duty to protect federal buildings, such as the federal courthouse in Portland, which has been at the centre of protests in the city.

He also took issue with a suggestion by Congresswoman Sheila Jackson Lee that there was systemic racism within the police – a key issue since the death of George Floyd at the hands of white police officers in Minneapolis in May.

“I don’t agree that there’s systemic racism in the police departments, generally in this country,” he said.

Jerry Nadler, the top Democrat on the committee, accused Mr Barr of facilitating the president’s desire to inflame tensions ahead of November’s election.

“The president wants footage for his campaign ads and you appear to be serving it up for him as ordered,” Mr Nadler said. “You are projecting fear and violence nationwide in pursuit of obvious political objectives. Shame on you, Mr Barr.”

But Mr Barr rejected suggestions he is swayed by Mr Trump. “The president has not attempted to interfere” in any decisions, he said in his opening statement. “On the contrary, he has told me from the start that he expects me to exercise my independent judgment to make whatever call I think is right. That is precisely what I have done.”

Mr Barr was also questioned on his controversial decision to order federal forces to remove protesters from Lafayette Square near the White House on June 1st, just before Mr Trump walked across the square to pose with a Bible outside St John’s Church. Mr Barr insisted his order was unconnected to Mr Trump’s decision to visit the church, though he said he had been informed that afternoon that the president was considering the visit with members of his cabinet.

Mr Trump’s eldest son on Monday tweeted a link to a 45-minute video showing a group of doctors arguing that the anti-malarial drug hydroxychloroquine is a treatment for coronavirus and advising against wearing face masks.

Though his father retweeted the tweet, Twitter said it was not taking action against the president because he had retweeted rather than directly tweeting a link to the material.

The offending video was removed from the platform, and Donald jnr’s account was suspended for 12 hours.

Though the US president is Twitter’s most high-profile user, the social media company recently flagged some of his tweets, including one for glorifying violence.

On Monday, the president described Twitter’s “trending” function which shows which topics are most popular on its platform as “disgusting”.

“Sooo many trends are about me, and never a good one. They look for anything they can find, make it as bad as possible, and blow it up, trying to make it trend. Really ridiculous, illegal, and, of course, very unfair!” he wrote.

The increase in tensions between the Trump family and Twitter comes ahead of a key appearance on Wednesday in congress by the chief executives of two other tech giants, Facebook and Google.

Many leading figures on the right in Congress have accused the social media giants of exhibiting a left-wing bias, even as the Republican Party and Donald Trump use platforms such as Facebook for Mr Trump’s re-election campaign.

1 Sand-hued cyclepaths changing the face of south Dublin coast
2 Meat plant clusters may be down to softly-softly approach
3 Midlands lockdown: ‘Why shut down Offaly and leave Dublin open?’
4 Midlands lockdown: Movement restrictions in place for residents of Kildare, Laois and Offaly
5 Inside the dog-trafficking trade: ‘After drugs, it’s guns, then pups’
Real news has value SUBSCRIBE