Day of acrimony, violence and fear as Trump supporters storm heart of US democracy

The US Capitol was put on lockdown as crowds protesting US president-elect Joe Biden's victory breached security barricades while Congress was debating the certification of Biden's electoral win over Donald Trump. Video: Reuters 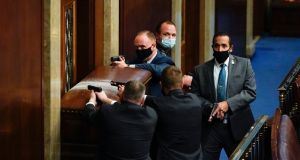 US Capitol police with guns drawn stand near a barricaded door as protesters try to break into the House chamber. Photograph: Andrew Harnik/AP Photo

The final days of Donald Trump’s presidency descended into chaos and insurrection on Wednesday, as Trump-supporting protesters stormed the US Capitol in a violent display of loyalty to a president resisting a peaceful transfer of power.

In extraordinary scenes, the American carnage predicted by Donald Trump four years ago erupted in the very spot where he delivered his inauguration speech in front of the US Capitol building.

Thousands of flag-waving supporters broke through police barriers, mounted the inauguration stands erected for Joe Biden’s swearing-in ceremony and smashed windows in the historic building. They then entered the domed edifice, moving room by room, and marching through the historic Rotunda, some holding Confederate flags.

Members of Congress, who had just begun debating objections to the November 3rd election result – itself an extraordinary event – were ordered to shelter in place as Capitol police engaged in a shoot-out in at least one of the two chambers.

One civilian suffered gunshot wounds, officials said. Tear gas was deployed and members were ordered at one point to lie down on the House floor as rioters tried to breach the doors of the chamber. They later entered through the second- and third-floor galleries, after members had been evacuated.

As the Capitol was put on lockdown, and Washington’s mayor announced a 6pm curfew, police struggled to control the violence.

Police from the neighbouring states of Maryland and Virginia and DC’s entire National Guard were mobilised, along with the FBI and other law enforcement officials.

Wednesday afternoon’s riots began after crowds of Trump supporters moved from an earlier protest near the White House on the National Mall, which was addressed by the US president. Mr Trump spoke for more than an hour at what he dubbed the “Save America” rally, raging against “weak Republicans” who refused to support his calls for Joe Biden’s election victory to be overturned, and making false claims of voter fraud.

“We will never give up, we will never concede … We will not take it any more,” he declared to cheers from thousands of supporters, many of whom who had driven for days from across the US to attend the rally.

He also ramped up pressure on vice-president Mike Pence, who was at that time arriving at the US Capitol to preside over the joint session of Congress to certify the result of the presidential election. “If Mike Pence does the right thing, we will win the election,” Trump declared. As proceedings began, however, Mr Pence released a statement that he would not challenge the election result after “a careful study of the constitution”.

Senate majority leader Mitch McConnell quickly followed suit, publicly breaking with Trump by dismissing the president’s claims of election fraud, even as dozens of Republican members prepared to support the president’s conspiracy theories on the Senate floor. “The voters, the courts and the states have all spoken. If we overrule them, it would damage our Republic for ever,” Mr McConnell said. But shortly after chief political insurrectionist Senator Ted Cruz delivered a speech perpetuating some of the myths of electoral fraud peddled by the president, proceedings were halted as demonstrators stormed the building.

While the deep fissures within the Republican party riven by Donald Trump promised to be the story of the day, instead the country and world looked on in disbelief as the symbolic bastion of US democracy was stormed by rioters.

Global leaders, including Taoiseach Micheál Martin, denounced the violence unfolding in Washington. Minister for Foreign Affairs Simon Coveney said: “We must call this out for what it is: a deliberate assault on Democracy by a sitting President and  his supporters."

Incoming president Joe Biden decried the “assault on the citadel of liberty, the Capitol itself”.

He demanded that President Trump address the nation in a televised speech “to fulfil his oath and defend the constitution and demand an end to this siege”.

Shortly after, Mr Trump released a video in which he encouraged his supporters to leave the Capitol building, but repeated his baseless claims that the presidential election was rigged.

“I know your pain, I know you’re hurt. We had an election that was stolen from us. It was a landslide election ... but you have to go home,” he said. Mr Trump’s daughter Ivanka deleted a tweet in which she described the rioters as “American Patriots” as she urged calm.

The day had begun with hope among Democrats about a new political beginning in the US. Two Senate races in Georgia on Tuesday looked set to deliver control of the US Senate to Democrats – a huge boost to incoming president Biden as he assumes the presidency on January 20th.

But instead January 6th descended into a day of acrimony, violence and fear as an outgoing president and his supporters quite literally launched an attack on the heart of American democracy, and raised questions about how a nation so divided can ever heal again.