Calls on Israel to extend coronavirus vaccination programme to Palestinians 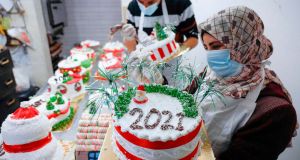 A Chef presents a cake to a customer at a bakery in Khan Yunis in the southern Gaza Strip. In Gaza there have been 43,134 reported coronavirus cases, with 404 fatalities. Photograph: Mohammed Abed/AFP/Getty

As Israel presses ahead with its coronavirus vaccination programme, a number of human rights groups have called on the country to also provide doses to Palestinians in the West Bank and Gaza.

Israel’s Kan public broadcaster reported on Wednesday night that a few dozen vaccines were secretly transferred to the Palestinian Authority in Ramallah on Tuesday, and that Israel was considering a Palestinian request for additional supplies.

“The Israeli government must stop ignoring its international obligations as an occupying power and immediately act to ensure that Covid-19 vaccines are equally and fairly provided to Palestinians living under its occupation in the West Bank and the Gaza Strip, ” the organisation said in a statement issued on Wednesday.

“There could hardly be a better illustration of how Israeli lives are valued above Palestinian ones.”

Separately, a group of some 200 rabbis signed a petition by the Rabbis for Human Rights organisation, calling on the Israeli government to hasten the distribution of Covid-19 vaccines amongst the Palestinian population.

The rabbis cited medieval Jewish scholar Maimonides who wrote that it is a religious obligation to save other human beings, saying it was a moral imperative for Israel to act immediately, especially in Gaza, over which, the rabbis asserted, Israel exercises extensive control.

With more than one and a half a million Israelis now vaccinated – more than 15 per cent of the population– the country leads the world in its inoculation drive, but the only Palestinians to have received the jab are residents of east Jerusalem.

Israel was previously reported not to have received a request for assistance from either the Palestinian Authority (PA), which controls most of the population in the West Bank, or from the Hamas authorities in Gaza.

Under the terms of the Oslo peace accords, the Palestinian Authority in Ramallah is responsible for the healthcare of its own population. The PA says it has applied to the World Health Organisation and the United Nations for help with obtaining vaccines.

On Monday the Palestinian health ministry said it expects to receive its first vaccine doses next month.

Although Israel is leading the world in terms of population percentage vaccinated, the December 19th rollout came too late to prevent a sharp spike in infections, prompting the government to order a strict lockdown beginning on Thursday at midnight.

Vaccinations are due to run out in a few days and from next week the only vaccinations administered for the time being will be the second dose for people who have already received the first Pfizer- BioNTech jab.