The Democrats are within touching distance of gaining control of the US Senate after Raphael Warnock won his runoff election in Georgia against Republican senator Kelly Loeffler. Video: Reuters 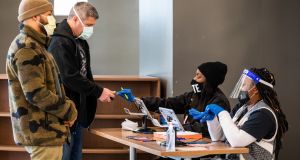 Election officials assist voters at a polling location during the US Senate runoff elections in Atlanta, Georgia. Photograph: Dustin Chambers/Bloomberg 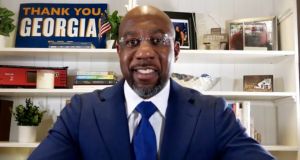 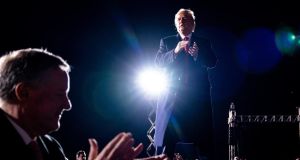 Democrats have won both senate seats for Georgia giving them control of the chamber and the power to advance US president-elect Joe Biden’s policy goals.

Raphael Warnock, a Baptist preacher from the historic church of Martin Luther King jnr, beat Republican incumbent Kelly Loeffler to become the first black senator in the history of the deep South state. Jon Ossoff, a documentary filmmaker who at 33 will become the Senate’s youngest member, also declared victory with a narrow lead over incumbent David Perdue.

The results would give Democrats narrow control of both chambers of Congress, making it easier to appoint liberal-leaning judges and advance legislative priorities from coronavirus relief to climate change when Mr Biden takes office on January 20th.

“Georgia’s voters delivered a resounding message yesterday: they want action on the crises we face and they want it right now,” Mr Biden said in a statement. He said he would work with both parties to confirm key administration officials quickly. That would amount to a final defeat for outgoing president Donald Trump, who stands to be the first US president since 1932 to lose the White House and both chambers of Congress in a single term.

With 98 per cent of the vote counted, Mr Warnock led Ms Loeffler by 1.2 percentage points, roughly 54,600 votes, according to Edison Research. Ossoff led Perdue by more than 17,000 votes, just shy of a 0.5 percent threshold to avoid a recount. Most outstanding votes were from Democratic-leaning areas. Winning both contests would hand Democrats narrow control of the Senate by creating a 50-50 split and giving Vice President-elect Kamala Harris the tie-breaking vote from January 20th.

Georgia has found itself in the firing line since that election, with Donald Trump disputing the results of the presidential election in the state which was narrowly won by Joe Biden.

On Saturday, the president pressured Georgia’s secretary of state and officials to “find” extra votes to swing November’s election in his favour. On Tuesday, those same election officials oversaw the Senate run-off races which were conducted smoothly.