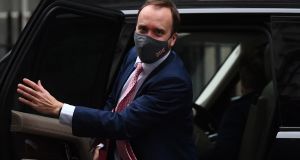 Heath secretary Matt Hancock in Downing Street the morning after PM Boris Johnson set out further measures as part of a lockdown in England in a bid to halt the spread of coronavirus. Photograph: Victoria Jones/PA Wire

Britain’s coronavirus restrictions could last until the end of March, easing gradually as more people are vaccinated, Boris Johnson has told MPs. The prime minister said the spread of the virus, boosted by a new, more easily transmissible variant, meant there was no choice but to order people to stay at home and to close schools and many businesses.

“Our emergence from the lockdown cocoon will not be a big bang but a gradual unwrapping,” he told the House of Commons.

“That is why the legislation this House will vote on later today runs until March 31st – not because we expect the full national lockdown to continue until then but to allow a steady, controlled and evidence-led move down through the tiers on a regional basis.”

The prime minister was speaking ahead of a debate on the latest restrictions, which MPs approved overwhelmingly by 524 votes to 16.

Britain reported a further 1,041 coronavirus deaths on Wednesday, the highest daily figure since April 12th, bringing the country’s death toll to 77,346. The Office for National Statistics estimated this week that more than a million people in England have the virus, over 2 per cent of the population.

Mr Johnson said the National Health Service (NHS) was committed to offering a vaccination by February 15th to everyone in the top four priority groups, including older care home residents and staff, everyone over 70, all frontline NHS and care staff and all those who are clinically extremely vulnerable. These groups account for about 80 per cent of the deaths from the virus.

“After the marathon of last year we are indeed now in a sprint, a race to vaccinate the vulnerable faster than the virus can reach them. Every needle in every arm makes a difference,” he said.

“We are already vaccinating faster than any comparable country and that rate I hope will only increase.”

Labour leader Keir Starmer offered his party’s support for the lockdown at what he called “perhaps the darkest moment of the pandemic”. But he said the government’s failure to act quickly throughout the pandemic had made Britain’s situation worse, both in terms of public health and the economy.

“This is not just bad luck, it’s not inevitable. It follows a pattern. In the first wave of the pandemic, the government was repeatedly too slow to act and we ended 2020 with one of the highest death tolls in Europe and the worst economic hit of any major economy,” he said.

During the debate on the measures, Conservative backbenchers pressed health secretary Matt Hancock to commit to regular votes on the restrictions before they must end on March 31st. He said the government would relax the restrictions as quickly as possible but the pace would be determined by the impact of the vaccination programme.

“We have to see the impact of that vaccination on the reduction in the number of deaths, which I very much hope we will see at that point. That is why we will take an evidence-led move down through the tiers when – I hope – we have broken the link between cases and hospitalisations and deaths. We will need to see the protection in lived reality on the ground, but we will watch this like a hawk. My aim is to keep these restrictions in place for not a moment longer than they are necessary,” he said.