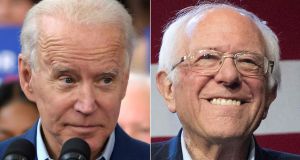 Democratic presidential candidates Joe Biden and Bernie Sanders: With the primary field effectively down to two, focus now turns to the battle ahead. Photographs: Mark Felix and Mark Ralston

After more than a year of uneven debate performances, inconsistent polling and a historically large field of candidates, America finally got some clarity this week as to who will be the Democratic nominee to face Donald Trump in November.

The remarkable political comeback of Joe Biden saw the former vice-president catch the only other remaining contender, Bernie Sanders, who had clocked up victories in most of February’s primaries.

Biden’s revival began a week ago in South Carolina. Having channelled his dwindling resources and time into the first southern state to vote, Biden won big, securing almost half the vote.

Within 48 hours a cascade of endorsements followed as rivals like Amy Klobuchar and Pete Buttigieg fell by the wayside and lined up behind Biden. He then secured a better-than-expected victory on Super Tuesday, winning 10 of the 14 states.

Sanders is still a formidable opponent, and is expected to sweep up most of California’s delegates when counting in the largest state finally ends.

The dramatic events of the last week have renewed focus on the process of choosing an American presidential nominee. They have also turned a number of political truisms on their head.

Is a good ground campaign necessary at state level? Not necessarily. Biden notched up surprise victories on Tuesday in states he did not even visit and where he had virtually no campaign infrastructure, such as Massachusetts and Minnesota. So much for the oft-cited argument that Hillary Clinton lost Wisconsin to Trump in 2016 in part because she never visited the midwestern state.

Does money talk in US politics? Not every time. Bloomberg found out the hard way that $500 million in advertising spending could only really buy him the pacific island of American Samoa, the only territory to vote for him, though he picked up some delegates in other states.

But as analysts ponder the reasons for Biden’s resurrection, there are also questions for the Democratic National Committee. Serious consideration should be given to the continued prominence of Iowa and the other early voting states in the primary system.

There has long been an argument that Iowa and New Hampshire, which hold their contests first, play too much of a role in the selection process. As overwhelmingly white and rural states, they do not represent the demographics of America, and more specifically the make-up of the Democratic electorate.

The fiasco over the Iowa caucus, which saw results delayed for several days, also furthered calls to reassess the system – while also arguably depriving the winner, Pete Buttigieg, of the media coverage boost that typically accompanies an Iowa victory, given the focus on the voting debacle.

The fact that Biden finished fourth in Iowa and fifth in New Hampshire also undermined the conventional political thinking that a strong showing in these early voting states is essential to secure the momentum needed for the rest of the contest. The Biden argument that he would do better in more racially diverse states played out.

The Democratic Party needs to also examine how two white men in their late 70s have emerged as the frontrunners, given the diversity of the Democratic electorate.

With the primary field effectively down to two, focus now turns to the battle ahead. Sanders faces a crucial few weeks as he takes on Biden and the bulk of the Democratic establishment who have backed him. The next states to hold primaries are naturally less friendly territory for Sanders, while the youth vote on which he was banking has failed to turn out in big numbers so far.

A key state to watch will be Michigan, one of four states voting next Tuesday. Sanders had been leading there in recent weeks, but polls suggest that Biden is gaining ground.

Biden too faces a myriad of challenges. His shortcomings have not gone away, and it will be interesting to see how he performs in the next TV debate in just over a week’s time. His campaign is also way behind Sanders in terms of ground organisation and digital advertising, so he will be hoping to inherit not only some of Bloomberg’s campaign money, but also his impressive campaign infrastructure, including in the field of internet advertising.

With the candidates neck-and-neck in terms of delegates, the race is too close to call. But the packed primary calendar suggests we could have a good sense of who will be the nominee by the end of this month.