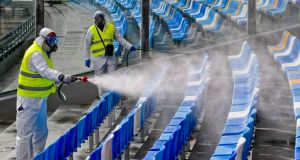 Operators of ‘Napoli Servizi’ sanitise the San Paolo stadium in Naples to fight the contagion of coronavirus. Photograph: EPA/CIRO FUSCO

European Union health ministers are looking for ways to produce more drugs and protective supplies in Europe to cope with shortages caused by the coronavirus outbreak.

EU health ministers are holding an emergency meeting in Brussels where they are discussing these issues.

Many EU countries rely on China, the source of the outbreak, for drug ingredients, and they are now struggling to avoid shortages after the coronavirus outbreak disrupted supplies and delayed shipments.

Protective equipment is already in short supply in most EU countries, officials said, which puts doctors and nurses at risk.

Europe needs to bring medical production back to Europe because it relies too much on imports from non-EU countries, officials in France and Germany, the EU’s largest countries, have said.

Both countries have blocked exports of some protective gear to other EU countries, to avoid risks of shortages in their own territory .

“This is not something that will be solved tomorrow, but we must start this discussion today so that we have a solution after tomorrow,” Austrian health minister Rudolf Anschober told reporters at a meeting in Brussels.

France imports about 40 per cent of drug ingredients from China, a situation that French finance minister Bruno Le Maire called over-reliance on Beijing.

Italy, the EU country hardest hit by the outbreak, has also restricted exports and has formally requested help from other EU states to meet its needs for protective gear. Lithuania and the Czech Republic have restricted exports, too, an EU official said.

At a public session of the meeting, EU industry commissioner Thierry Breton said demand for face masks and other protective gear had increased “exponentially” in Europe since the beginning of the crisis.

He said he was confident that EU-based manufacturers could meet this growing needs in the coming weeks, provided that production was co-ordinated.