Democratic candidates prepare to roll the dice in Las Vegas 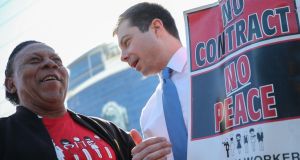 Democratic presidential candidate Pete Buttigieg speaks with a member of the Culinary Workers’ Union on a picket line outside the Palms Casino Resort in Las Vegas. Photograph: Mario Tama/Getty Images

As the political world descended on Las Vegas ahead of this weekend’s Nevada caucuses, life in the state’s most famous city continued as normal.

On Wednesday, six Democratic nominees and their entourages took over the Paris Las Vegas hotel for the ninth Democratic debate. Meanwhile, President Donald Trump’s motorcade was whisking the president to the Trump hotel that peers over the Las Vegas skyline ahead of his rally yesterday.

As swarms of police cars blocked off huge chunks of the Las Vegas strip, bemused revellers and feathered showgirls looked on in curiosity, their interest temporarily diverted from the non-stop street life taking place around them.

Las Vegas may be known as America’s adult playground, but it is also plays an increasingly important role in state and national politics. Nevada is the third state in the country to select its primary candidate, a status that has become particularly important this year given the lack of a standout winner in the Iowa and New Hampshire contests.

It is also the most diverse of the early voting states, its ethnic make-up more reflective of the country – and particularly the Democratic electorate. About 30 per cent of the state is Hispanic, with African Americans representing 9 per cent of the population.

Las Vegas is central to this demographic trend. The city in the southern part of the state near the Arizona and California borders has the highest concentration of Hispanics in Nevada. An estimated one in four people speak Spanish at home in Clark county, where Las Vegas is situated. Many of those who have gravitated towards Las Vegas were attracted by work opportunities. Though Nevada was hit badly by the 2008-2010 financial crash, its concentration of hotels and casinos have long been a source of employment for workers, many originally from Mexico and central America.

This week the city’s famous strip of hotels and casinos threw themselves into the political domain as some of Las Vegas’s best-known hotels created caucus sites for voters.

Beginning last Saturday, the ground floor of venues such as the Bellagio and Wynn casino hotels opened up for early voting for local employees, some sites opening for 24 hours.

The early-voting initiative was the result of lobbying by the local branch of the culinary workers’ union, a hugely influential force in local and state politics in Nevada. The union represents 60,000 workers on the strip including casino stewards, chefs and hospitality staff.

It had long argued that the caucus system – which involves voters caucusing in local precincts at noon on a Saturday – disenfranchised thousands of casino workers and hospitality staff who typically work weekends. This year, early voting allowed many more workers to participate in the caucus system – opening up a potential new cohort of voters.

This new variable was not lost on candidates, who have been busy courting the union chief and their members this week, though Bernie Sanders in particular has run into difficulty after the union warned that his “Medicare for all” plan could jeopardise the health insurance schemes of union workers.

Originally from Ethiopia, Zewedi is a casino worker at the Bellagio, an upmarket 4,000-room hotel on the Las Vegas strip. She moved to the city 15 years ago from Africa as a refugee and decided to stay in the area. “The work is good,” she says, smiling, as she tidies the communal area surrounding the slot machines. Like most of her co-workers she is a union member.

“It is fantastic. They ensure we have good work and conditions. No one has to work more than eight hours,” she says. She cast her vote in the Democratic caucus last Sunday in the hotel – the first time she has participated in the primary voting contest.

The high proportion of early voters is a marked characteristic of the Nevada caucuses. Almost 75,000 ballots have already been cast this week. Nonetheless, all eyes will be on the state this weekend, particularly in light of the chaotic caucus process in Iowa on February 3rd. Nevada has already shelved plans to use a discredited app that was deployed in the ill-fated Iowa caucuses. Instead, so-called precinct captains will be given iPads with special online application spreadsheets.

There is still room for problems, however. The early votes will need to be hand-fed into voting machines. Precinct captains will also be required to use a paper back-up worksheet. With all eyes on the integrity of the Democratic primary system on Saturday, Nevada will be hoping that it can avoid a repeat of the Iowa experience earlier this month.