America Letter: Likely presidential candidate must not let mature age suggest he is past it

Former US vice president Joe Biden says that he will be more respectful of personal space after complaints that he made some women uncomfortable by touching them at political events. Video: Joe Biden/Twitter 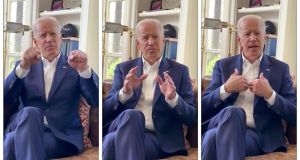 Former US vice-president Joe Biden in stills from a video in which he pledges to be “more mindful about respecting personal space in the future”. Photograph: Joe Biden/Handout via Reuters.

This week the Democratic race to become the party’s nominee in next year’s presidential election took an uncomfortable turn as Joe Biden came face to face with the #MeToo movement.

In an essay for New York magazine, former Nevada legislator Lucy Flores described how Biden, at a political event in 2014, put his hands on her shoulders from behind, leaned in, smelled her hair and planted a kiss on the back of her head.

Biden was vice-president at the time. A second woman came forward alleging that Biden rubbed noses with her at a fundraiser in Connecticut in 2009.

By the end of the week, seven women had accused the former vice-president of inappropriate behaviour.

Even Republicans have weighed in on Biden’s side

Biden – who has yet to declare an official run for the presidency but is widely expected to so – issued two written statements that deftly managed to convey that it was never his intention to act inappropriately, while stopping short of apologising.

He also posted a two-minute video in which he pledged to be more respectful of personal space. “Social norms are changing. I understand that, and I’ve heard what these women are saying,” he said. “Politics to me has always been about making connections, but I will be more mindful about respecting personal space in the future.”

The video appears to have quelled the disquiet, at least for the immediate term, though it is possible that more women may come forward.

Several women have defended the popular former senator, including Stephanie Carter, the wife of former defence secretary Ash Carter. Referring to a widely shared photograph of Biden holding her shoulders while her husband was being sworn in in 2015, she said that the photo had been mis-interpreted, and that it had not been her #MeToo moment.

Even Republicans have weighed in on Biden’s side.

Social norms are changing. I understand that, and I’ve heard what these women are saying. Politics to me has always been about making connections, but I will be more mindful about respecting personal space in the future. That’s my responsibility and I will meet it. pic.twitter.com/Ya2mf5ODts

Describing the former vice-president as his friend, Senator Lindsey Graham said that “whatever he did it may have been inappropriate but it was not driven by malice or misconduct”.

But even if Biden rides out this week’s storm, the incident has served to shed uncomfortable light on his record on women’s issues.

Though he has justifiably highlighted his work defending the victims of sexual violence – as a senator, he introduced the 1994 Violence Against Women Act – the spectre of the Anita Hill controversy is difficult to shake.

Last year’s controversy over Brett Kavanaugh’s nomination to the supreme court revived the 1991 episode which saw a young lawyer, Anita Hill, accuse Clarence Thomas, a nominee to the court, of sexual harassment.

Biden was at the time chairman of the all-white, all-male Senate judiciary committee, presiding over the aggressive and dismissive cross-examination of Hill.

As with the Kavanaugh hearing last year, Thomas was ultimately confirmed and remains on the bench.

Biden has since said he owes Hill an apology, though it is not clear if he has made direct contact with her.

Biden’s team has long been aware that the Anita Hill controversy is his Achilles’ heel, and many in Washington this week privately expressed relief that his well-known tactile style has emerged as an issue early in the electoral cycle.

Among the measures Biden is said to be considering to win over women voters is the appointment of a high-profile female running mate, such as Senator Kamala Harris or former Georgia gubernatorial candidate Stacey Abrams.

But this week’s allegations of inappropriate conduct reveal a deeper problem – his age. The sight this week of Biden earnestly looking into the camera and conceding that times have changed, was a touching indication of a man caught between two worlds, an individual trying to navigate a changed political climate.

Now 76, Biden was first elected to the Senate 46 years ago.His popularity is unquestioned – despite not having declared a run, he consistently leads polls of possible Democratic candidates.

As a former senator and vice-president, he offers an image of someone who can steady the ship, a man who in many ways is the anti-Trump. “Given where we are in America, the public just wants someone who knows where the light switches are,” says one senior Democrat.

The fact that the Pennsylvania-native can connect with white, working-class voters who supported Donald Trump in 2016 is also a key advantage as he mulls a bid. Biden’s ability or experience for the job is not under question.

But ultimately, as Democrats consider an array of more than a dozen candidates, Biden will have to convince people that his time has not passed.