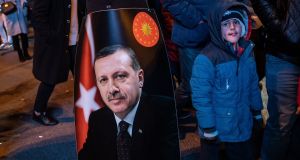 A boy stands next to a poster of Turkish president Recep Tayyip Erdogan in Istanbul on Sunday. Photograph: Sedat Suna/EPA

Recep Tayyip Erdogan sought to project confidence to the supporters massed beneath him as he spoke from the balcony of his ruling party headquarters in the early hours of Monday. But behind the stoical veneer, the Turkish president was well aware he had suffered one of the worst election results of his 16 years in charge.

“If we have deficiencies, it is our duty to fix them,” Erdogan told the crowd in a tacit acknowledgment of his party’s poor showing in local elections.

Having lost Ankara, the nation’s capital, and facing a bitter dispute over the result in Istanbul, Erdogan now adds the need to fix his dented support to the array of domestic and international challenges he was already facing.

“It’s a terrible result for Erdogan,” said Berk Esen, an assistant professor of international relations at Ankara’s Bilkent University. “There’s an economic crisis, there’s an international crisis due to an ongoing stand-off with the US. At the same time, there is an electoral defeat that shows his international partners and domestic opponents that’s he’s quite vulnerable.”

Erdogan was not a candidate in Sunday’s municipal polls, but he fought the campaign for control of Turkey’s 81 provinces as if it were a general election. He sought to distract from voter complaints about sky-high food prices and rising unemployment by casting the contest as a battle for national survival in the face of external threats. He zigzagged his way across the country on a gruelling schedule of campaign rallies.

The Turkish leader fought so hard because he had learnt through personal experience how victory at a local level can trigger tectonic shifts in the political landscape. He was elected mayor of Istanbul in 1994 on the back of a wave of support for Islamist politics. Eight years later, the Justice and Development party (AKP) he founded swept to national power.

Even after Sunday’s bruising result, no one was predicting Erdogan’s imminent demise. His AKP is still the largest party nationwide, with 44 per cent of the vote. The 65-year-old, who remains by far and away the country’s most popular politician, has found his way out of tight spots many times before. He may yet overturn the opposition’s apparent win in Istanbul, or find ways to make life difficult for the newly-elected mayors.

Nonetheless, the loss of Ankara and a string of economic powerhouses along the country’s south coast – including the industrial city of Adana and the tourism hub of Antalya – sent a clear message to the political alliance led by the AKP.

“They survive,” said Asli Aydintasbas, a senior fellow at the European Council on Foreign Relations, a think tank. “But they don’t have the confidence of voters in big cities, including the best and brightest, the industrial elite and the middle class.”

Winning back those people will be a central focus for Erdogan as he looks ahead to his dream of presiding over celebrations for the centenary of the Turkish republic in 2023. The task will be harder now that five out of six of Turkey’s most populous provinces are in the hands of the opposition, depriving the AKP of the patronage networks that have long served as its lifeblood. Erdogan may even find himself confronting the emergence, long rumoured, of a breakaway faction of the AKP – as well as an invigorated opposition.

At the same time, the Turkish president must deal with pressing diplomatic challenges. He faces a looming confrontation with Washington over Turkey’s plan to buy an S-400 air defence system from Moscow. He must also find a way out of the deadlock over the future of northern Syria after US president Donald Trump promised to wind down the American presence in the country.

The strong showing for Erdogan’s allies in the Nationalist Movement party (MHP) could complicate both of those issues. The MHP, an ultranationalist group that has propped up the ruling party, harbours deep suspicions of foreign powers and takes a hardline stance towards Kurdish militants in Syria, potentially limiting the Turkish president’s ability to reach a compromise.

But the most daunting task facing him is the urgent need to fix deep-rooted problems in the economy that were exacerbated after a dramatic currency crisis last August.

Erdogan moved swiftly on Sunday to offer investors soothing talk about respecting “the rules of a free-market economy” and plans for economic reforms. But sceptics said that the poor outcome for the AKP could limit its capacity for bold steps. “The current government is likely to have limited appetite for reforms, and may instead focus more on quick fixes, such as flooding the economy with more cheap credit,” said Nora Neuteboom, an economist at the Dutch bank ABN Ambro.

Analysts warned that Erdogan and his son-in-law, the finance minister Berat Albayrak, must quickly present a comprehensive programme to restore trust – both among foreign investors and Turkish citizens.

“If they don’t they are in trouble,” said Tim Ash, an emerging markets strategist at BlueBay Asset Management. “Things could get ugly quite quickly.” – Copyright The Financial Times Limited 2019