Empty Congress seat a signal of US election integrity crisis 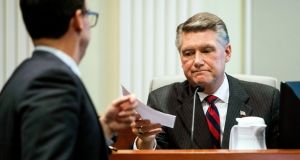 Last year’s midterm elections may seem like a distant memory, but more than three months after Americans went to the polls, one seat in Congress has yet to be filled.

A rural district in southern North Carolina has been without representation in Washington since Congress convened in January. Republican candidate Mark Harris narrowly defeated Democrat Dan McCready in the ninth congressional district election in November. But the seat has remained vacant amid accusations of vote-tampering and election fraud.

On Thursday, the North Carolina State Board of Elections declared the outcome void and ordered a new election.

The announcement followed a dramatic four-day board of elections hearing in the state capital, Raleigh, which lifted the lid on an audacious web of voter-tampering. The accusations centred around Leslie McCrae Dowless, a local Republican operative who worked on Harris’s campaign.

The panel heard how the 62-year-old Dowless, who has criminal convictions for insurance fraud and perjury, orchestrated a campaign to fraudulently submit absentee ballots. Several witnesses, including Dowless’s former step-daughter and a woman who served him at a local fastfood chain, recounted how they had been co-opted into collecting absentee ballots and illegally completing them in return for cash.

The forms were ferried to and from Dowless’s office, where signatures were forged. The ballots were then mailed from post offices near the supposed voters’ homes to avoid suspicion.

But while Dowless’s practices were the focus of the case, the key issue was whether Harris knew of them. The 52-year-old Baptist pastor, who was well-known and respected in the area, had run for election unsuccessfully in 2016. He decided to contest again in 2018 and elicited Dowless’s help.

Over the course of the hearing it emerged that his campaign paid Dowless in excess of $100,000, more than it gave to any other contractor.

By his own admission Harris hired Dowless because he had seen the work he had done for other candidates in previous elections. Harris said he was aware of the efforts to encourage absentee voting but believed that the operation was within the bounds of what was legal in the state.

On Wednesday, however, the hearing took an unexpected turn when Harris’s 27-year-old son John, a federal prosecutor, told the hearing he had warned his father that Dowless’s practices might be illegal. His testimony elicited tears from his father, who sat listening in the room.

Further pressure was heaped on Harris on Thursday when McCready’s team reacted with fury at the news that the Republican’s legal team had not turned over all documents covered by a subpoena.

As Harris himself took the stand, it was expected he would continue to pursue his team’s two main lines of argument – that he knew nothing about the fraud, and that the allegations of absentee ballot fraud had no material impact on the election either way.

Instead, after hours of probing questions, Harris said that a new election was warranted as the public’s confidence in the election had been undermined, prompting the State Board of Elections to order fresh elections.

The controversy has particular resonance in North Carolina, a state already known for endemic gerrymandering. The US supreme court is due to take up a North Carolina gerrymandering case after a district court ruled last year that the Republican-controlled state assembly drew electoral districts to favour the Republican Party. The state’s voter ID laws – which campaigners argue disproportionately affect minority voters – are also highly contentious.

But the North Carolina controversy has wider ramifications, coming at a time when issues of electoral integrity and accusations of voter fraud are rife. Significantly, Republicans – including President Donald Trump – were silent this week on the North Carolina ruling, despite the president repeatedly accusing Democrats of benefiting from illegal votes in the past. In particular, he has claimed that “millions and millions” of people vote illegally in California, a claim not borne out by the evidence.

November’s gubernatorial race in Georgia was dominated by accusations of voter suppression tactics as Democrat Stacey Abrams accused secretary of state Brian Kemp, the Republican candidate, of refusing to register thousands of voters because their names did not precisely match those on other government databases.

With the North Carolina controversy, Republicans have found themselves on the wrong side of the debate. But the debacle offers a salutary lesson for the American political system. At a time when trust in public institutions is low, ensuring election integrity is crucial if Americans are to keep faith in their voting system and the democratic process.