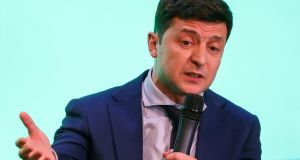 Ukraine’s presidential election was always going to be a bruising battle, but as the contenders trade trash talk and demand drug tests before a potential showdown in Kiev’s main arena, the run-off is starting to resemble a prize fight.

Comic and impresario Volodymyr Zelenskiy easily won the first round of voting last Sunday after promising sweeping reforms and running a campaign powered by snappy social media posts, the popularity of his touring troupe and his television role as a hapless schoolteacher thrown into the role of president.

The political novice had refused to debate with his rivals, fuelling concern over his inexperience, but he seized the initiative on Wednesday by challenging incumbent Petro Poroshenko to a televised face-off at the 70,000-capacity Olimpiyskiy Stadium.

In a slickly produced video, a blues guitar plays as Mr Zelenskiy (41) strides out in slow motion on to the pitch, and invites Mr Poroshenko to debate him there in front of a full house and the cameras of national broadcasters.

“You were hoping that I’d run away, freeze, hide. No – I’m not you in 2014,” Mr Zelenskiy says in reference to Mr Poroshenko’s election victory of that year.

He demands that the president stop deriding him as a pro-Kremlin candidate and “puppet” of oligarch Ihor Kolomoisky, whose television station broadcasts his shows while lambasting Mr Poroshenko.

With a nod to a message on the president’s campaign billboards – “Think!” – Mr Zelenskiy concludes by saying: “I’m giving you 24 hours – you think.”

Mr Poroshenko, a confectionary billionaire, quickly responded with his own video, in which he ambles into shot outside the presidential administration in central Kiev and welcomes the prospect of a televised head-to-head meeting.

“A debate’s not a show. An election campaign is an event that decides the future of the country . . . It’s not a joke,” he declares as the soundtrack swells from tinkling pianos to urgent action-movie strings.

“You and I are very different. The main difference is that the arrows of our political compasses point to diametrically opposed parts of the world,” he says.

“My country is a strong, European Ukraine that would never in any circumstances kneel before anyone,” he adds, in a jab at his rival’s 2014 comment that he would beg Russian president Vladimir Putin to halt his undeclared war in eastern Ukraine.

As the candidates sparred throughout Thursday, the challenger’s adviser, Irina Venediktova, insisted: “Vladimir Zelenskiy’s path will be 100 per cent pro-European . . . In no way is he a pro-Russian candidate.”

Mr Zelenskiy also demanded pre-debate drug tests, but then questioned the impartiality of the medical facilities at the Olympic Stadium in rejecting Mr Poroshenko’s suggestion that they give samples there on Friday.

Security concerns ahead of the April 21st run-off came into focus again on Thursday, when an unidentified man was killed by a bomb that exploded as he planted it under the car of a security service officer in Kiev.

Meanwhile in Washington, Nato pledged to increase its presence in and surveillance of the Black Sea region, after Russia last November fired on and seized three Ukrainian ships and captured 24 sailors, who are now awaiting trial in Moscow.