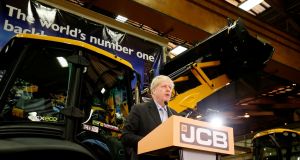 Former UK foreign secretary Boris Johnson has said it would be “shameful” for Theresa May’s g overnment to request an extension to the Article 50 process to delay Brexit beyond March 29th.

“It would be shameful at this late stage to change that totemic date — March 29th, the one fact to which the public has been able to cling with absolute certainty in this sea of political confusion,” the prominent Brexiteer said.

“All this vacuous talk of extending Article 50 is dishonest but it’s also weakening our negotiating position once again.”

Speaking at JCB headquarters in Staffordshire, Mr Johnson said it would be “absolutely preposterous” if a delay were to force the UK to spend money on elections to the European Parliament this spring. The UK will no longer need to elect MEPs once it leaves the EU.

“The public would have the strong and altogether justified impression of an elite conspiracy to thwart Brexit.”

Mr Johnson said that calls to rule out a no-deal Brexit were “irrelevant” because it was “overwhelmingly likely that we will get a deal, we just won’t get this deal”.

He said the UK should remove the backstop - a mechanism included as an insurance policy to prevent a hard Irish border - from Mrs May’s plan but retain the proposed transition period to December 2020, using the period to negotiate a free trade deal.

The UK should withhold half of its £39 billion financial settlement until the deal is completed, in order to “put a tiger in the tank” of the EU’s willingness to make concessions.

Mr Johnson said he was confident that the EU27 would become more “flexible” in negotiations as the deadline for Brexit got nearer, as history showed that it was “only in the last few days and weeks of a negotiation that the big concessions are made”.

Meanwhile, Labour leader Jeremy Corbyn could face up to a dozen resignations from his frontbench if the party backs a second referendum as a way out of the Brexit stand-off.

A string of shadow junior ministers told the Guardian they were strongly opposed to the idea of a second referendum, which they fear would expose Labour to a vicious backlash in leave-voting constituencies.

Mr Corbyn has refused to enter talks on Brexit with Mrs May on until she rules out the idea of a no-deal departure and has ordered his party’s MPs to refuse similar invitations.

Mrs May has written to Mr Corbyn telling him that ruling out a no-deal Brexit was “an impossible condition” and calling on him to join cross-party discussions.

With no sign of the impasse being broken, pressure is growing on Labour to consider a so-called people’s vote as the UK prepares to leave the EU on March 29th.

With Mr Corbyn’s hopes of a general election fading with the prime minister’s narrow victory in the no-confidence vote, some Labour supporters are raising pressure on Mr Corbyn to support a second referendum. - PA/Guardian