‘Every business will feel no deal is hurtling closer. A new plan is needed immediately’ 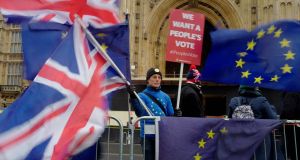 An anti-Brexit activist waves British and EU flags outside the Houses of Parliament in London Photograph: Tolga Akmen/AFP/Getty Images

Weary business leaders in Northern Ireland unanimously warned that a no deal outcome would be a “nightmare” scenario and said there were now “very real” concerns among businesses that the UK was moving closer to crashing out of the EU .

Stephen Kelly, chief executive of the industry group Manufacturing NI, which counts some of the North’s largest employers including Bombardier among its members, said it had received calls and messages from anxious manufacturers about what might happen next.

“They are deeply worried and believe they need to activate their Brexit contingencies.  We have asked them to wait for a few days to see what happens next in parliament,” Mr Kelly said.

Previously the industry body had confirmed that some of its members were stockpiling supplies and escalating plans to invest elsewhere as part of their Brexit-proofing strategies.

Manufacturing NI, like other key business organisations in the North backed Mrs May’s Withdrawal Agreement and remain convinced it “is workable and still better than no deal”.

Mr Kelly said the agreement provides for a backstop that is “wanted and required” by businesses in the North which is why it will continue to support the Withdrawal Agreement.

“We need its approval so we can secure the transition period, protect the jobs and move to the more positive future relationship negotiations and agreement with the EU.

“The direction, certainty and insurance committed to NI businesses and the community by the UK and the EU must be maintained in whatever parliament decides to do next,” he added.

And whatever the UK parliament moves to do next, it needs to be done with speed according to the Northern Ireland director of the Confederation of British Industry.

Angela McGowan said: “Every business will feel no deal is hurtling closer. A new plan is needed immediately.

“No deal would immediately put Northern Irish jobs and businesses at risk and jeopardise years of positive economic development and integration across the island.  It must be avoided to protect our all-island economy.”

Although there is no uniform agreement among businesses in the North about what the UK’s future relationship with the EU should be, there is according to Ann McGregor, chief executive of the Northern Ireland Chamber of Commerce and Industry , an absolute understanding of the“need to avoid a messy and disorderly Brexit”.

“Firms are in the dark on too many aspects of life after 29th of March. This has already led to many businesses taking action – pausing on recruitment and investment, stockpiling goods, and relocating factories in other parts of the EU.

“In fact, a third of NI chamber members are currently putting growth and investment plans on hold in the absence of clarity from Westminster,” she said.

It is not just businesses however that will be the direct casualties in Northern Ireland if a UK/EU exit deal is not in place after March 29th.

Aodhán Connolly, director of the Northern Ireland Retail Consortium, said a no deal Brexit “means that Northern Ireland households will face higher prices and less choice on the shelves something they can ill afford”.

“We are now closer than ever to the possibility of a no-deal that will be a disaster for Northern Ireland,” Mr Connolly said.

The president of the Ulster Farmers’ Union Ivor Ferguson has also issued a fresh warning about how the future might look for the North’s farming community in a no deal Brexit environment.

“Leaving with no deal would have catastrophic consequences for family farm businesses in Northern Ireland.

“It means high tariffs on our exports creating an effective trade embargo on export of animals and animal-based products, and the possibility of lower standard imports flooding the UK market. crippling the industry and rendering our farmers uncompetitive,” Mr Ferguson said.

1 Who are Ireland’s 17 billionaires?
2 State subsidises public sector retirees to cover gap until State pension
3 My father in a nursing home wants to gift me his house
4 Richer countries must do more to tackle climate change, Thunberg tells Davos
5 Health insurance: Switch often for your financial wellbeing
6 Nama lends Cosgraves €15m to fund huge apartment development
7 Are there annual limits on inheritances or gifts to a child?
8 Q&A: Why has the pension age question suddenly become an election issue?
9 Builders completed 21,500 homes in State during 2019
10 Irish whiskey sales slow in US but distillery visitors top 1m locally
Real news has value SUBSCRIBE