US speaker of the House of Representatives Nancy Pelosi says that the Republican party are "desperate" as the US government shutdown drags on. Video: C-Span 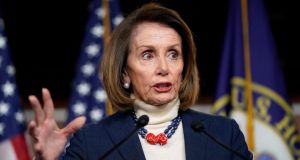 Speaker of the House, Democrat Nancy Pelosi speaks during a press briefing on the 27th day of a partial government shutdown. Photograph: Reuters/Joshua Roberts

US president Donald Trump has cancelled the US delegation’s trip to the World Economic Forum in Davos as the impasse over the US government shutdown deepens.

The White House announced on Thursday that “out of consideration for the 800,000 great American workers not receiving pay and to ensure his team can assist as needed, President Trump has cancelled his delegation’s trip to the World Economic Forum in Davos, Switzerland”.

Mr Trump had already pulled out of the global gathering earlier this month over the US government shutdown, but senior members of his administration including treasury secretary Steve Mnuchin and secretary of state Mike Pompeo had been due to attend.

The announcement caps a dramatic day in Washington after President Trump cancelled a planned trip by Nancy Pelosi and a congressional delegation to Afghanistan just minutes before they were due to leave Washington by denying the members of congress use of a military plane.

The decision immediately prompted accusations that Mr Trump was prepared to allow his own cabinet members to travel to Davos, while at the same time stopping a planned trip by the House speaker and other members of Congress.

US president Donald Trump announced on Thursday he was cancelling a planned trip by House speaker Nancy Pelosi to Brussels, Egypt and Afghanistan, just minutes before she was about to leave Washington.

In a letter to Ms Pelosi written a day after she wrote to Mr Trump asking him to delay his State of the Union speech due to the government shutdown, Mr Trump informed her he was postponing her three-country trip.

“We will reschedule this seven-day excursion when the Shutdown is over,” he wrote.

“In light of the 800,000 great American workers not receiving pay, I am sure you would agree that postponing this public relations event is totally appropriate,” he said in the letter, which was publicised by the White House.

He suggested that Ms Pelosi, who was due to travel with a cross-party delegation of members of congress, could make the trip by flying on a commercial aircraft.

He added: “It would be better if you were in Washington, negotiating with me and joining the Strong Border Security movement to end the shutdown.”

As commander-in-chief, the US president has the power to withhold permission for the use of military aircraft, but the decision to do so appears to be unprecedented.

Mr Trump’s decision to disclose publicly the visit to Afghanistan, which had been kept under wraps, was also criticised by analysts.

The surprise move emerged as Ms Pelosi and members of Congress were about to board an official aircoach at the US Capitol which was due to bring them to Joint Base Andrews, where a military aircraft awaited.

Some legislators had already boarded the bus and were ready to depart.

The deepening tensions between Mr Trump and the top Democrat in Congress unfolded as the government shutdown continued for its 27th day.

Parts of the government have been closed since December 22nd and negotiations between the White House and Democrats in Congress have stalled.

The main stumbling block to an agreement is Mr Trump’s demand for $5.7 billion to build a wall on the US-Mexico border, a request that Democrats oppose.

In a series of tweets Republican senator Lindsey Graham appeared to blame both Mr Trump and Ms Pelosi for the continuing impasse.

“I am glad the Speaker wants to meet our troops and hear from our commanders and allies. I am very disappointed she’s playing politics with the State of the Union,” he tweeted.

But he said in a second tweet: “President Trump denying Speaker Pelosi military travel to visit our troops in Afghanistan, our allies in Egypt and NATO is also inappropriate.”

Other Republicans expressed surprise that Ms Pelosi was planning on going overseas during the government shutdown.

“Why would you leave the country with the government shutdown when you’re speaker of the House?” said Kevin McCarthy, the top Republican in the House of Representatives.

Earlier, during a trip to the Pentagon, Mr Trump urged European countries to pay their fair share to Nato as he announced the launch of a new US missile defence system yesterday.

In a keynote address – his first visit to the department of defence since the resignation of defence secretary Jim Mattis last month – Mr Trump said that while the US was 100 per cent committed to Nato, European members need to contribute more.

“We’re gonna be with NATO 100 percent, but as I told the countries, ‘You have to step up and you have to pay’,” he said. He was speaking days after reports emerged that he privately discussed withdrawing from the transatlantic defence alliance last year.

Mr Trump, who has long criticised Nato, the military alliance established after the second World War, said that progress was already being made in terms of European members increasing their spending.

“They are starting to step up,” he said. “They can well afford to.”

Mr Trump was speaking at an event to mark an overhaul of the country’s missile defence system – the first major change to the defence programme in a decade.

The president launched an unclassified 108-page report which called for a “comprehensive approach to missile defence against rogue state and regional missile threats” and recommended the development of new technologies.

The upgrade was needed in order to guard against threats from Iran, Russia and other hostile nations, he said.

The report also highlights North Korea’s missile capabilities, and its ability “to strike US territories, including Guam, US forces abroad and allies in the Pacific Ocean”.

“We have some very bad players out there,” Mr. Trump said. “We’re a good player. But we can be far worse than anybody if need be.”

The event also marked Mr Trump’s first public appearance since four US servicemen were killed by a suicide bomb attack in Syria earlier this week.

Islamic State, also known as Isis, targeted a US military convoy in the northern city of Manbij, claiming the lives of 19 people, including the four from the US.

The attack took place days after US troops officially began withdrawing from Syria amid claims by the Trump administration that Islamic State had been defeated.

Mr Trump gave his “deepest condolences to the families of the great American heroes who laid down their lives” but he declined to discuss the US efforts in Syria at any length.

Instead he pivoted to a discussion on the ongoing government shutdown, blaming Democrats for the impasse.

Mr Trump is demanding $5.7 billion for a border wall, but Democrats are refusing to accede to this demand.

“Nothing else is going to work,” he said of the wall.

He also said the Democratic Party had been “hijacked by the open borders fringe”.