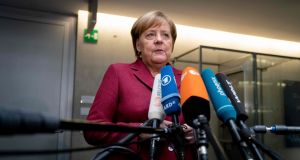 “We think that it is up to the British side ... to tell us how things move on from here,” German chancellor Angela Merkle said on Wednesday. Photograph: Kay Nietfeld/AFP/Getty Images

German politicians have called for calm after Tuesday’s Brexit vote and reiterated their support for Ireland’s concerns, as a gulf opens up between their public and private levels of empathy towards the UK.

In the House of Commons, MPs rejected prime minister Theresa May’s withdrawal agreement with the EU by 432 to 202, a majority of 230.

Chancellor Angela Merkel said she regretted deeply the vote result and was ready to keep up work to find an orderly solution.

“We think that it is up to the British side ... to tell us how things move on from here,” she said. “We want to limit the damage caused by the UK’s departure, and there will be damage. But we are prepared that there will be a disorderly departure.”

Before a Bundestag debate on Thursday for a no-deal Brexit legislation, the Christian Democratic Union (CDU) leader Annegret Kramp-Karrenbauer’s called for calm.

“We have to keep cool heads even if the heart is heavy,” said Ms Kramp-Karrenbauer. Pressed on whether Berlin would get involved in finding a solution, she added cryptically: “Naturally Germany has a special role in Europe and in this discussion.”

But if she has any ideas of how Berlin might help break the Brexit deadlock the CDU leader was, like Dr Merkel, keeping them to herself.” Now we have to see how things develop further in London,” she said.

Whether Germany is prepared for a hard Brexit is, increasingly, a matter of public debate.

Many companies praise the European Commission for pro-active and transparent communications. But some have doubts about Berlin’s preparedness, with one describing the German government’s Brexit communication strategy as a “wall of fog”.

“We cannot say how well prepared the authorities here are – there is a lack of communication over what happens if it comes to a no-deal Brexit,” said Niels Beuck, chief executive of the German road hauliers’ association (DSLV).

In the newspapers, the Bild tabloid out-sunned the Sun on Wednesday, describing the vote as “Brexshit”. It lashed out at the “manic hubris” of the Conservative government and wondered aloud at what point a country could be declared politically bankrupt. “Answer: when ... it doesn’t matter who is in government.”

German experts, quizzed asked about the backstop, warned that the Irish Border was unlike any other in Europe given the fragility of Northern Ireland politics.

However, Dr Schwarzer added: “The Good Friday agreement was a political solution ... but it cannot be kept at all costs if the conditions change.”

The Handelsblatt business daily reported that the EU has “quietly decided to leave to Ireland the decision over the next steps” – in particular on the backstop.

“Should Ireland change its position, then the EU would follow,” it quote an unnamed diplomat as saying.

As fears of a hard Brexit spread across Europe, Finnish president Juha Sipilä asked about 5,000 UK citizens living in Finland to register with the authorities.