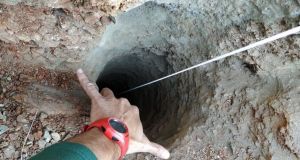 The narrow borehole in which a two-year-old fell down in Malaga. Photograph: Malaga Fire brigades/EPA

A rescue effort was still under way in southern Spain on Wednesday, more than three days after a two-year-old boy fell into a 110m deep borehole while on a day out with his parents.

Julen Jiménez was with his family in the countryside near the town of Totalán on Sunday, where they were preparing a meal. While exploring nearby, Julen fell into a deep hole dug for water extraction, which was only 25cm in diameter.

The depth and dimensions of the hole have made the rescue extremely difficult.

“I’m still hoping that my son is alive,” Julen’s father, José Roselló, told local media. “We mustn’t stop until the boy is out of there.”

Initial attempts to locate Julen with cameras were thwarted due to earth that had fallen from the sides of the well, blocking the bottom of the hole after the boy fell in. Sweets belonging to the child were found in that section of the hole.

On Wednesday the authorities reported that they believed they had recovered traces of Julen’s hair, matching his DNA.

“There is one certainty: scientific proof that the child is there,” said María Gámez, who represents the central government in Málaga province.

Dozens of rescuers have been working to remove earth from the borehole in a bid to reach the child. Also, mining engineers from northern Spain are digging two tunnels, one into the side of the hill where the borehole is located and another, vertical one, parallel to it. Technicians employed by a Swedish company that located 33 trapped Chilean miners in 2010 are also involved.

The authorities said the rescue teams expect to reach Julen via the tunnels by Friday, which could be up to 120 hours since the accident.

On Tuesday the mayor of Totalán, Miguel Ángel Escaño, criticised the rescue attempts, describing them as “an improvisation”.

Mr Roselló said the accident happened when Julen’s mother was making a phone call and he was collecting firewood. Julen went running off and Mr Roselló’s cousin followed the boy, only to see him fall feet first into the hole through some stones that had been covering it. “I pushed the stones aside as much as I could and I put my arm in up to my shoulder, with my head on the ground to try and reach him,” Mr Roselló said.

In 2017 the couple’s other child, Oliver, who was three, died of a heart defect, according to Spanish media.

“I didn’t know how deep the well was and I thought he was nearer, Mr Roselló said, adding that he could hear Julen crying.

“All I could tell him was: ‘Don’t worry, Daddy is here and your little brother [Oliver] will help us.’ ”