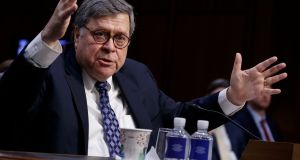 William Barr testifies before the Senate judiciary committee during the first day of his confirmation hearing on Capitol Hill in Washington, DC, US. Photograph: Shawn Thew/EPA

US president Donald Trump’s pick to become the next attorney general gave a robust defence of his eligibility for the role on Tuesday as he testified before the Senate judiciary committee at a confirmation hearing.

Under questioning by Democrats and Republicans on the committee, William Barr said he would not interfere with the ongoing inquiry by special counsel Robert Mueller, adding that it was important that Mr Mueller completes his investigation into Russian electoral interference in 2016.

“I don’t believe Mr Mueller would be involved in a witch hunt,” Mr Barr said, referring to the term frequently used by Mr Trump to describe Mr Mueller’s investigation.

Mr Barr highlighted his personal relationship with Mr Mueller, describing the two of them as “good friends”. The two men worked together in the department of justice during George HW Bush’s presidency, when Mr Barr was attorney general.

Asked by Democratic senator Chris Coons if he would fire Mr Mueller if directed to do so by the president, Mr Barr said he “would not carry out that instruction”, assuming there was no good cause.

Mr Barr (68) also appeared to part with Mr Trump over the decision of the previous attorney general, Jeff Sessions, to recuse himself from the Russia investigation, a decision that ultimately led to his dismissal by the president in November. Mr Sessions “probably did the right thing” in recusing himself, Mr Barr told the committee.

But while Mr Barr suggested that his age and experience would help to ensure his independence, he also vigorously defended a memo he wrote last year in which he suggested that the special counsel was overstepping his remit by investigating the president for obstruction of justice.

Under questioning by Democrats about the memo, he said it was “entirely proper”, claiming that former senior officials often weigh in on certain issues.

Mr Barr has been working in the private sector, including for telecoms company Verizon, since he last worked for the government.

The Trump nominee, who is known for his expansive attitude towards presidential power, will continue his testimony for a second day on Wednesday. Current deputy attorney general Rod Rosenstein has indicated that he may step down once Mr Sessions’s replacement is confirmed. Mr Barr said he had no involvement in Mr Rosenstein’s decision to depart.

Meanwhile, the government shutdown that has led to the closure of vast parts of the federal government and left hundreds of thousands of workers without pay continued on Tuesday.

Democrats who were invited to the White House for a lunchtime meeting with the president on the continuing impasse declined to attend the summit, which was attended by nine Republican members of Congress.

In a sign that efforts to end the shutdown will continue, the annual congressional week-long recess for Martin Luther King Day next week has been cancelled.

Earlier in the day, Mr Trump tweeted: “A big new Caravan is heading up to our Southern Border from Honduras. Tell Nancy and Chuck that a drone flying around will not stop them. Only a Wall will work. Only a Wall, or Steel Barrier, will keep our Country safe! Stop playing political games and end the Shutdown!”

The tweet referenced leading Democrats Nancy Pelosi and Chuck Schumer, who are opposing Mr Trump’s attempts to get funds for a border wall included as part of any new funding measures for government, which has led to the current partial shutdown.