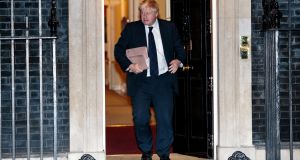 Conservative MPs have warned Theresa May against increasing Britain’s offer on the Brexit divorce bill as the prime minister met senior cabinet ministers on Monday to discuss possible concessions. Ahead of the meeting of a cabinet subcommittee on Brexit, Downing Street dismissed as “speculation” reports that Ms May was preparing to double her offer from €20 billion to €40 billion.

The group includes Boris Johnson and Michael Gove, who campaigned for Brexit, as well as chancellor Philip Hammond and others who opposed it. Reports over the weekend suggested that Mr Johnson and Mr Gove were relaxed about increasing the financial offer but backbench Conservatives warned against paying any more to Brussels.

As the meeting broke up last night, a Downing Street source said they would not discuss what happened at an internal meeting.

“It remains our position that nothing’s agreed until everything’s agreed in negotiations with the EU. As the prime minister said this morning, the UK and the EU should step forward together,” the source said.

Conservative MP Nigel Evans accused the EU of demanding “ransom money” from Britain to progress the negotiations to talks about a future trade deal.

“I want to see the money that’s saved from us leaving the European Union spent on British nurses, not Brussels bureaucrats. If Philip Hammond ends up paying money for which there’s no absolutely obligation whatsoever, he’s paying a ransom and I thought British governments did not pay ransom money,” he said.

Earlier, Ms May restated her promise to meet all Britain’s commitments as it left the EU, but declined to say if she would increase the offer. The prime minister’s official spokesman said on Monday that her meeting with Taoiseach Leo Varadkar in Gothenburg had been constructive.

“We look forward to making further progress in the run-up to the December meeting of the European Council, ” the spokesman said, but declined to offer details of what form such progress on the Border might take.

MPs on Tuesday will continue their line-by-line scrutiny of the European Union (Withdrawal) Bill, when they will debate an amendment that would keep Britain bound by the European Charter of Fundamental Rights after Brexit. The amendment has the support of former Conservative attorney general Dominic Grieve as well as that of the opposition parties but any Conservative rebellion is not expected to be big enough to defeat the government.

In a statement to the House of Lords on Monday, Lord Callanan said last week’s statement was incorrect. “The supreme court proceeded in the Miller case on the basis that article 50 would not be revoked, but did not rule on the legal position regarding its irrevocability. It was, and remains, the government’s policy that our notification of article 50 will not be withdrawn,” he said.