Brexit: Barnier says EU at one with Varadkar on Border demand

At a conference in Brussels, Michel Barnier has made clear that Ireland’s demand for UK assurances on the Border are completely at one with the EU Brexit negotiating stance. 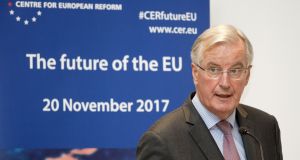 Michel Barnier has made clear in no uncertain terms that Ireland’s demand for UK assurances on the Border are completely at one with the EU Brexit negotiating task force position.

The EU’s chief Brexit negotiator told a thinktank meeting in Brussels that it is up the UK government to provide a way to avoid imposing a hard border between the Republic and Northern Ireland when Britain leaves the European Union in 2019.

The onus was on the UK “to come forward with proposals” to avoid imposing a physical border in Ireland. “Those who want Brexit must offer solutions”, said Mr Barnier.

It was a message he repeated to ministers later when repoting on the negotiations to the 27 “remainer” EU states.

The sentiment was echoed by former taoiseach John Bruton, who told the thinktank meeting it was odd that, 13 months after the Brexit referendum, the British were “now effecting surprise” at the implications for the Belfast Agreement of their decision to leave the Customs Union and the single market.

They ought to have addressed the issues from the start, Mr Bruton said. It was ironic, he observed, that it was the EU that was most concerned about the potential effect of Brexit on the Belfast Agreement.

Mr Barnier said it was not clear if the UK was prepared to maintain regulatory harmony with the EU. “The UK says it will continue to apply some rules but not all rules.

“It is unclear what rules will apply to Northern Ireland after Brexit and what the UK is willing to commit to avoid a hard Border,” he said.

The issue of regulatory divergence “will be decisive, it will shape the future relationship and the conditions for the ratification of that relationship from European governments,” said Mr Barnier, echoing comments last weekend by Taoiseach Leo Varadkar on the fringes of the European Social Summit.

The Government will be particularly pleased that Mr Barnier has framed the argument in terms of the challenges that regulatory divergence make for the whole idea of a frictionless border.

The issue had been raised in the context of the determination of the UK to leave the Customs Union in a leaked European Commission paper ahead of the last round of talks.

Mr Varadkar has told Theresa May the UK’s decision to “unilaterally” rule out important options in the Brexit talks has prompted Ireland and theEU to set their own non-negotiable red lines,

“Before we move to phase two talks on trade, we want taken off the table any suggestion that there will be a physical border, a hard Border, new barriers to trade on the island of Ireland,” he said. Mr Barnier also used the clearest language yet to tell Britain that UK-based banks will lose access to the single market as a “legal consequence” of Brexit.

Formal Brexit talks in Brussels, the seventh round, are expected to resume on Friday next. With the December 13th summit looming, that leaves precious little time for any “substantial progress” prospects. There is some expectation, however, that the UK may this week raise its offer on the financial settlement to some €40 billion.