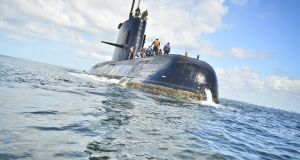 Undated handout photo from the Argentine Navy of the ARA San Juan submarine, which is missing. File photograph: Argentina Navy/EPA

Military ships and aircraft were searching off the coast of Argentina today for an Argentine navy submarine missing for two days, officials said.

The vessel, which was patrolling off Patagonia with 44 crew members, last made radio contact on Wednesday, Capt Enrique Balbi, a spokesman for the Argentine navy, said in a television interview. Two planes were deployed on Thursday afternoon to begin searching for the submarine, ARA San Juan, one of three in Argentina’s fleet.

Rescuers were hindered by poor visibility and they resumed the search this morning using sea vessels and aircraft.

The submarine’s last known location was 240 nautical miles off the coast, according to the navy. The ARA San Juan was travelling from the Patagonian city of Ushuaia to Mar del Plata, in Buenos Aires province, conducting a routine security patrol.

One of the crew members is Eliana María Krawczyk, Argentina’s first female submarine officer. Her father, Eduardo Krawczyk, told the Todo Noticias news network today that the family was hoping for the best.

The rescue mission included two ships, destroyer ARA Sarandi, which has a helicopter onboard, and corvette ARA Rosales. Argentine officials also asked civilian vessels in the area to monitor for possible radio signals from the submarine.

Navy officials attempted to downplay the situation after local news outlets broke news of the search early today. “We are not talking about an emergency right now, but rather we are handling it as a loss of communication with the submarine,” Rear Adm Gabriel Martín González, who oversees submarine crews, told reporters outside the naval base at Mar del Plata.

According to protocol, submarines that lose the ability to communicate must surface, Balbi, the navy spokesman, said.

If the ARA San Juan managed to do that, its crew could survive for weeks. Balbi said it was not known whether the vessel had surfaced. Submarines can travel underwater for a couple of days, he said, before needing to surface so their diesel engines can recharge their batteries. – New York Times