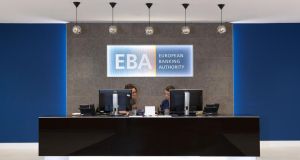 Brexit move: the Government hopes the European Banking Authority will relocate from London to Ireland

Ireland is now pinning it hopes on getting the European Banking Authority when post-Brexit relocations of EU institutions from London are decided. Ministers will vote on Monday in Brussels on the destination for the authority and its 167 staff. Ireland is regarded by officials as an outside chance, however.

With 18 cities competing for the European Medicines Agency, the likelihood of winning sufficient first-preference votes to stay in that contest appear slim. The smaller field of eight – Brussels, Dublin, Frankfurt, Luxembourg, Paris, Prague, Vienna and Warsaw – competing for the banking authority is seen as offering better chances for alliances that Taoiseach Leo Varadkar was cultivating as late as Friday at the Social Summit for Fair Jobs and Growth, in Gothenburg.

With countries like Belgium, Luxembourg, France and Germany already home to more than one European Union institution, Irish diplomats sense that Ireland, home only to Eurofound, the agency for the improvement of living and working conditions, has a strong case.

The European Banking Authority is the umbrella regulator for the EU’s banking system, founded in 2011 as a beefed-up form of an earlier committee of European domestic financial supervisors. It aims to enforce a “single-rule-book” approach to overseeing banks across the European Union.

Slovakia, one of four relatively new EU states that don’t yet have an EU agency, has been tipped as a surprise favourite to snatch the medicines agency in what is being seen as an unpredictable political bazaar, where favours, money and jobs are traded by leaders courting support.

Many possible tradeable gifts are on the table, including top jobs – the chair of the Eurogroup is coming up – at EU agencies, and even votes on EU legislation. According to Politico, Italy has even offered to back deploying more Nato troops to the Baltics. Estonia, Latvia and Lithuania aren’t bidding for either agency and so have a clutch of valuable first-preference votes to bargain with. It’s an offer Ireland would not be able to replicate.

Ireland, like other bidders, is putting up about €10 million to help ease European Medicines Agency staff relocations. It is also offering €13.5 million in rental support for 10 years to the banking authority and €78 million to the larger – 900-strong – medicines agency towards its rental and other costs.

Ireland’s case for both agencies is made in glossy brochures and videos, both introduced by Mr Varadkar, offering the European Medicines Agency three tailor-made sites in Dublin. The banking-authority offer is unspecific about locations but says a significant number of suitable buildings are available.

To help to whittle down the field the European Commission was asked to evaluate bids by using “objective” criteria. It did so without eliminating any candidates, and the canvassing that followed tended to ignore that exercise.

The EU’s “old” member states emphasised the need to ensure continuity in the institutions, with many pointing to polls of their highly specialised staff suggesting they would not be willing to move to places like Sofia or Bucharest. Only Amsterdam, Milan, Vienna, Copenhagen and Barcelona, polls suggested, would entice more than two-thirds of the current 900 employees.

A caucus of the most recent member states is also at work, and the Greeks are pushing a Mediterranean alliance.

The complicated voting system – by secret ballot – offers great opportunities for trading favours in the several rounds of balloting likely. The ministers, who will vote on the medicines agency first, will have three preferences to cast, with first preferences worth three votes, seconds worth two votes, and thirds worth just one. Crucially, this means that Ireland has just as many votes – or as few, depending on your perspective – as France or Germany, both of which are particularly keen on the banking authority.

In the first round any city that earns a majority of first preferences from the 27 states – which is to say 14 – wins. With 19 competing for the European Medicines Agency, and each state likely to give their own city a first preference, this is unlikely to happen, so the three cities with the most votes will proceed to the second round. The top two will then go on to the third, decisive round, if nobody has by then received at least 82 votes.

With a more modest eight contesting the banking-authority contest – down to seven after the EMA contest is decided, as no country can take both institutions – the issue could be decided in the first round.