Chris Johns: Brexiteers refuse to tell people that life will get worse

No minister is saying that in return for something in talks, the UK must give something 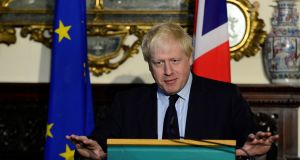 The quintessentially superficial Brexiteer Boris Johnson told us that Brexit will bring Britain and Ireland closer. By definition this cannot be true

Thanks to an outpouring of analysis, commentary and leaks we now know a lot about Brexit. While we have had no substantive update on the British government’s original “cake and eat it” objective, pretty much everything else has become clear. Even that ridiculous sound bite has revealed much: details are not the strong point of Brexiteers, they didn’t have a plan and still don’t.

Lawyers have explained the relevant treaties, and made crystal clear what the EU, as a matter of law, can offer and what it cannot.

The EU is first and foremost a legal construct. Rules are sometimes open to interpretation, and the EU is as guilty as any other institution of breaking its own laws. But even Brussels knows where to draw the line: the four freedoms of people, goods, services and capital. They are, in law, absolute and indivisible.

“Cake and eat it” seems to mean the UK gets a pass on freedom of the movement of people but retains access to the Single Market.

Absolutely everything we have heard from the lawyers, the EU Commission and various heads of state points unambiguously to one conclusion: no chance whatsoever.

On trade, I reckon 99 per cent of experts agree that erecting any barrier between the UK and the EU is not a good idea. Economists for Brexit (now renamed Economists for Free Trade) uses 19th century ideas updated with 1970s mathematics to argue that lost trade with Europe will more than be made up for by exports to the rest of the world.

These ideas have not only captured most of the press but are also given equal airtime on the BBC. Whenever one of those 99 per cent – derided “experts” all – are interviewed they are always alongside one of that vanishingly small band of opponents and treated with equivalence. It is rightly derided as false equivalence.

Now imagine building a wall, separating off the UK, down one side of that factory floor. You don’t need to be a trade expert to to guess what happens next.

Leaks from the European Commission confirm what many of us have suspected. There are only two possible deals.

One is the best trade agreement that the EU has so far managed, painfully, to negotiate with a third country. That would be CETA, the deal with Canada, only recently concluded after talks formally began on May 6th, 2009. Yes, 2009. And CETA has been explicitly rejected as an an option by Theresa May.

The other is the “Norway option” where the UK ends up with non-membership of the EU but with access to the Single Market granted by full acceptance of the four freedoms. This too has been explicitly ruled out by the British.

Business is worried that the best kind of trade deal typically covers mostly only manufacturing. Which means at least 80 per cent of the UK economy will be subject to trade barriers of one kind or another.

Hence the recent talk that special exemption be granted for financial services. The UK will adopt the four freedoms for finance (sort of at least) in return for retaining all of those City of London jobs. I imagine one or two other sectors of the UK economy would like something similar, not least the car manufacturers and Northern Irish agriculture. It’s possible that minds might be changed during negotiations, but so far the response from the EU has been to suppress a giggle.

Even after all this time the British still don’t get it. It’s a negotiation about fundamental trade-offs. No government minister ever tries to explain that in return for something, the UK has to sacrifice something. And that sacrifice will involve economic pain.

Actually, they do talk about this, but never to the British people. David Davis, lectured a European audience this week, telling them “not to sacrifice prosperity for politics”. That displays a fundamental lack of understanding – or just knowledge – of Europe’s history. The last 70 years are littered with examples of Europe putting politics ahead of economics. It’s why there has been peace since 1945.

The quintessentially superficial Brexiteer Boris Johnson told us that Brexit would bring Britain and Ireland closer. By definition this cannot be true. Unless Northern Ireland (at least) stays in the Customs Union – another thing ruled out by the hard-liners – there is a Border.

And Johnson explicitly linked the issue of the Irish Border with (not yet started) negotiations over Dover and Calais: that’s an absolute disgrace.

The UK has many problems: read Sarah O’Connor’s recent Financial Times piece about Blackpool and “Shit Life Syndrome” for some thoughtful and sympathetic insights into modern Britain.

And then ponder the fact that Brexit makes all of these problems worse.

1 Passengers face queuing in car parks at Dublin Airport
2 Major credit union plans to limit savings accounts to €40,000
3 Brother is dragging his heels as executor of uncle’s will - is there anything I can do?
4 Penneys will not reopen on Monday despite expected changes to lockdown rules
5 Trinity Biotech expects Covid-19 immunity test to be authorised shortly
6 Land dispute between Citywest Hotel owner and neighbours before court
7 Stocktake: Has Warren Buffett lost the magic touch?
8 Biopharma company founder named EY World Entrepreneur of the Year
9 Global stocks: what’s cheap and what’s not?
10 ‘I have a talent for justifying purchases’
Real news has value SUBSCRIBE