The UK must find a way to ensure there is no return to Border checks on the island of Ireland after Brexit before the second phase of the talks on a future trading relationship with the EU can begin, Taoiseach Leo Varadkar has said. Video: Reuters 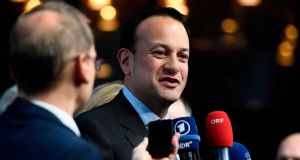 The UK’s decision to “unilaterally” rule out important options in the Brexit talks has prompted Ireland and the EU to set their own non-negotiable red lines, Taoiseach Leo Varadkar told the British prime minister, Theresa May, on Friday.

It was necessary to do so, he said to “set the parameters” of the next phase of talks, on trade and the United Kingdom’s future relationship with the European Union.“What we want to take off the table, before we even talk about trade, is any idea that there would be a hard Border, a physical Border, or a Border resembling the past . . . Then we’d be happy to move on to phase two,” the Taoiseach told journalists about their bilateral meeting on the fringes of the European Social Summit for Fair Jobs and Growth, in Gothenburg.

The meeting was forthright, he said. “Nothing changed today. But what was useful were the frank exchanges. Each clearly understands the other’s position.”

At the heart of the deadlock is the Irish and EU insistence that the UK explain now how it can preserve a soft, frictionless Border between Northern Ireland and the Republic, while the UK insists that the issue cannot be tackled until the EU agrees to move to discussion of phase-two issues.

Speaking at Iveagh House on Friday, on his first visit to Dublin since being appointed foreign secretary, in July 2016, Boris Johnson echoed Ms May’s approach. “In order to resolve those issues and get it right for our peoples, it is necessary now to move on to the second stage of the negotiations, which really entail so many of the questions that are bound up around the Border issue,” he said.

Minister for Foreign Affairs Simon Coveney said all parties wanted to move on but added: “We are not in a place right now that allows us to do that.”

The Taoiseach said it was up to Ms May to “put meat” on proposals that the UK had already made on establishing a “customs partnership union” with the EU. He insisted, and the EU was insisting, that there could not be a post-Brexit “regulatory gap” between the UK and the EU and Ireland. “The UK side has put forward a proposal that there be a customs partnership union between the UK and EU. We would like to tease out what that means.”

The “customs partnership” was one of the ways of dealing with the customs problem after Brexit that the UK suggested in a series of papers in August. Under it the UK would act as the external border of the European Union, as at present, and track goods that were to be re-exported to the bloc. EU tariffs and standards would be applied to those; London-set tariffs and standards would apply to goods circulating only in the UK.

But Mr Varadkar said it was a “circle that would not be squared”. “It is hard to understand how that would work, how they would contain within their jurisdiction goods and services brought in from third countries, and then, secondly, how we could have fair competition on that basis if they were concluding agreements, let’s say, for instance, with South America on agricultural products.” He repeated his insistence that the UK “can’t have its cake and eat it”.

The Taoiseach said he remained “an optimist”about the December time frame for the conclusion of “sufficient progress” on phase-one divorce talks. “I think it is certainly possible . . . but if we have to wait until the new year, or wait for further concessions, then so be it. But I think it would be in all our interests to proceed to phase two in December.”