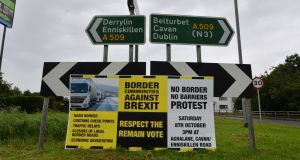 Farmer John Sheridan estimates that about one-fifth of the 5,000 jobs in Northern Ireland’s beef processing industry would be lost in a hard Brexit. Photograph: Alan Betson

A group of businesspeople from Northern Ireland and the Border counties travelled to Dublin on Wednesday to warn about the impact of Brexit on their areas.

Independent Senator Gerard Craughwell, who invited them, said that “instead of bringing politicians together to talk about Brexit, what we have done is brought the people who are suffering the results of Brexit”.

John Sheridan, a farmer from Fermanagh and member of the Border Communities Against Brexit lobby group, estimated about a fifth of the 5,000 jobs in Northern Ireland’s beef processing industry would be lost in a hard Brexit. He also warned that each one of of those jobs supported almost three other jobs in the region.

James Lowe, another farmer and a representative of the Northern Ireland Agricultural Producers Association (NIAPA), said the impact of World Trade Organisation tariffs of more than 50 per cent being applied overnight on goods would hurt businesses across the island.

“It would be catastrophic for the island, maybe more for the South because its cheese market is UK-based,” he said.

For 3,000 members of his association who produce milk in the North and have it processed across the Border in the Republic, there was “grave concern” about what will happen after Brexit.

Another farmer, William Taylor of Farmers for Action, another representative body, said Westminster “does not get the border it’s about to face with the EU”.

Michael Clarke, who owns a small hill farm and is part of NIAPA, said 85 per cent of his income comes from Europe and he does not see Westminster covering that. He believes Brexit will result in many hill farms being abandoned.

Businessman Seamus McKeegan, whose company runs trucks across Europe, said that even with “special status” or a unique agreement for Northern Ireland, his customers might not allow his lorries to run in and out of the EU along the usual transit corridors through the UK.

“When the UK drags the north of Ireland out of the EU, I am then placed in a third-world country outside of the EU. I won’t be fit to do any of the internal work within Europe that I do,” he said.

JJ O’Hara, who runs a tourism business, said the industry is already feeling the pain of Brexit with tourism numbers down 375,000 from the UK and facing 2,600 job losses next year.

“Brexit is already happening. We need to find a solution today for our industry,” he said.

Marianne Green, representing Rathlin Island, said the island of only 145 residents had “done really well in the last 20 years”. The island had even experienced a baby boom, she said, but Brexit had created uncertainty for the island’s three main industries: tourism, fishing and farming.

“We have no idea what way it is going to go in future,” she said.

Seán McAuley of Farmers for Action said he still remembers when he was seven years old and the screams of his mother and late aunt when they heard his uncle, a Catholic man, was shot going to his Protestant friend’s petrol station for a packet of cigarettes.

“I have two young sons,” he said. “I most certainly do not want to go back to those days.”