How an Irish priest found a role for Charles Manson: altar boy 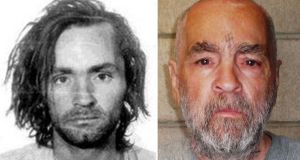 Charles Manson after his arrest in 1969 and in 2009. He became one of the most notorious killers of the 20th century after his followers murdered seven people in 1969. Photograph: New York Times

My first glimpse of Charles Manson was seeing him standing at the altar inside a tiny prison church in Vacaville, California in mid-August 1982. He was helping the chaplain, Fr Pat Leslie, a Co Louth native, rearrange the altar flowers.

At the time Manson was incorrigible behind bars, but Leslie – a shy, modest man, who ran marathons when he was not ministering to some of the most dangerous men in America – had found a role for Manson that had settled him down.

That role was altar boy.

Up close, Manson hardly impressed He was a few inches over 5ft with a tiny frame and a swastika burned into his forehead. The evil eyes that prosecutors said had mesmerised gang members enough to commit horrific crimes were a dark shade of brown and definitely menacing. He was 48, then an aging hippie look with a thick beard and long hair speckled with grey and even a guitar nearby.

“Niall meet Charlie,” said Fr Leslie, as if he was a new neighbour. Charlie glared balefully and didn’t shake the proffered hand. “You’ll be famous after this interview . . . I’m doing it for the father,” he said, looking at Leslie.

Fr Leslie took us outside to the tiny church courtyard where a third man in a wheelchair sat. I found out later he was in for killing his parents. Fr Leslie had found a way to work with him too.

Fr Leslie then took his leave. Suddenly I was petrified, What if Manson whacked me with his guitar? There was nowhere to run.

“How do you spend your time here?” I asked.

“I have my own time schedule. I have a green time, a gold time, a yellow time. Dig what I’m saying. I have been holding this rainbow for the last 15 years.”

Okay, I thought. He’s nuts, but he was clever too, like a fox.

“Why did your family members kill Sharon Tate and the others on Cielo Drive that night?” I asked.

“Each person did what they did for their own reasons, I was not that reason, I have no following, I was just taking my walk on earth . . . I was no better or worse than anybody,” he replied.

I asked him, “have you ever killed people?”

“No, I’ve been smarter than that, I’ve always had a champion.”

“You mean someone to do it for you?”

“Do you have any remorse for the killings?”

He exploded. “Remorse! What the hell is that . . . the writing went up on the wall. It didn’t have anything to do with me personally.”

What about Helter Skelter? (Manson’s term for what prosecutors said was a code for igniting a race war between black and whites. The prosecution claimed it was based on the Beatles song.)

“Did he receive messages through Beatles songs?”

“I didn’t think of the Beatles music at all. They were not my heroes, they were the heroes of the kids around me. My generation was Frank Sinatra; I was raised with Lassie Come Home . . . Bing Crosby was my hero.”

“So where did all the killing come from then if not from the Helter Skelter plan?” I asked.

“I don’t know. I’m saying the sixties was not mine. It was Jerry Rubin (a counterculture figure who praised Manson) who wrote, ‘rise up and kill your mom and dad.’ ”

What will always be a mystery is why such half-baked philosophy moved people to kill for Manson. In prison, stripped of his power, a tiny inmate with a ludicrous swastika on his forehead it was hard to imagine he had the ability with his mumbo jumbo to send people out to kill.

Manson revealed an obsession with wildlife and the environment in the interview. “The whole planet’s poisoning itself. What’s happening to the flowers and the birds and the albatrosses, all these things – whether it is the rain forests or the Amazon?”

If ever freed he would go back to nature he said, “to the forest , walk around, be left alone or go to the desert and get with the snakes and bugs and try to clean the water up”.

Who was his hero?

Richard Nixon, I just looked at what he did and said that’s pretty good. John Lennon until Happiness is a Warm Gun [Beatles song] caught up with him.

He told me he had written something for me. He handed over a note. It read:

“To communicate effectively, use big words that mush heads inside of heads in patterns given by deadheads gone from space a place. Am I to die another day on the crescent cross in fear of what you may do to me if I don’t do what you say is right?”

There were many such non-sequitur statements. His language at times was extremely violent, so much so that I only ever heard one other person in my life use such violent imagery, a top UDA man I once interviewed who was likely a serial killer in the North.

When not working at the church Manson made sock puppets and wrote songs, he told me. As the afternoon darkened his eyes seemed to turn from brown to black as we spoke, dark pools reflecting the heart of darkness within.

Manson said he believed in God and also in Jim Jones, who created a mass suicide in 1978 in Guyana after authorities sought to close down his cult headquarters.

One got the impression Manson would have liked to pull off such a mass suicide himself. Given more time he might well have developed such a following. He was America’s bump in the night, the antidote to the summer of love and flowers in your hair of 1967. His death closes the darkest chapter of that era.

I left Vacaville honestly wondering how he managed to accumulate such power as to have people obey his order to kill. Many people have wondered the same about Hitler. We indulge messianic messengers at our peril. In that context, Manson is still relevant today and would thrive in an era where there is no objective truth and people dim their faculties and follow leaders so blindly whether they be religious or political.