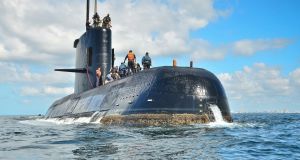 An undated photograph of the ARA San Juan, a German-built submarine that has gone missing with 44 sailors onboard. Photograph: Argentina Navy via AP

As search teams raced against time, and stormy seas, to find a missing Argentine submarine, officials said on Sunday that earlier hopeful reports that the crew might have tried to make satellite calls in recent days appeared to be wrong.

The defence ministry on Saturday had based optimistic statements on reports that there were seven attempts to communicate by satellite phone from the search area off the Patagonia coast. But on Sunday, the Argentine navy said that it was still analysing the calls and that there was no “clear evidence” that the calls had come from the submarine.

And the satellite phone company Iridium said in a statement that it had found no evidence that an Iridium phone aboard the vessel had been used since Wednesday morning.

The reports came as an increasingly robust international effort was hampered by stormy weather in the480sq km search area. Waves towered as high as 7m, while thunderstorms and powerful gusts of wind hindered the visibility and mobility of Argentine, American, British, Chilean and Brazilian military personnel scouring the area in ships and aircraft.

“These are less than favourable conditions that do make things difficult,” said Cmdr Erik Reynolds, a US navy spokesman. “You’re talking about 44 sailors out there. If they’re in trouble, there’s a finite amount of time to get to them, so I think there is a great deal of concern by the international community.”

The mystery surrounding the fate of the crew aboard the San Juan, a German-made submarine that has been part of Argentina’s fleet since 1985, has transfixed the nation since news of its disappearance broke early on Friday. The submarine last made radio contact last Wednesday.

Roughly 200 family members of the service members onboard were invited to await news at the Mar del Plata Naval Base in this seaside city, where two psychologists and one psychiatrist were on hand. “This has turned into one big family, and we are all helping each other get through this difficult time,” María Morales (51) the mother of crew member Luís García, said in an interview. “Sadly we don’t have any news, but at least there is no bad news.”

On Sunday, Argentine navy officials sought to temper hopes raised the previous day by reports of the satellite phone calls. Iridium officials have repeatedly called the company’s satellite phone onboard the vessel since Friday, but have had no luck getting through, according to an employee familiar with the effort who was not authorised to speak on the record. Argentine officials would not say whether the vessel had other satellite phones onboard.

Officials involved in the search and submarine experts following developments were contemplating a range of possibilities for what might have happened to the submarine. The best-case scenario, according to some experts, was that the submarine’s communications gear malfunctioned – perhaps as a result of a fire or flood – but that it did not lose the ability to navigate. Working against that theory is the fact that the submarine was due to arrive at its home port on Sunday.

“It’s grim,” said Capt Richard Bryant, a retired US navy submarine commander. “It implies that the ship is either on the surface without the ability to use its propulsion or that the ship is submerged.”

The first of those possibilities is deeply concerning, but not hopeless, according to experts. Given the stormy conditions, the crew is in significant peril if the vessel is being whiplashed. The grimmest alternative is that the submarine sank as a result of a catastrophic event such as an explosion or fire. If the crew survived such an event, those onboard could conceivably have enough oxygen for several days after it went under, according to an Argentine navy official who was not authorised to speak on the record.

If it is flailing on the surface, and the crew manages to weather the storm, the sailors would have enough fresh water and food to last for about 25 days, the official said.

The growing concern on Sunday was fuelled by the fact that the crew had not activated emergency beacons that are standard in commercial and military vessels. “The fact that we haven’t had communication for so long, that it didn’t show up at port as expected, and the fact that at least the initial search effort hasn’t found anything yet all point to the fact that the submarine may well unfortunately have been lost,” Cap t Bryant said.

In Mar del Plata, residents on Sunday affixed Argentine flags and signs outside the military base. “With the soul at a standstill until they return,” one read. “Stay strong Argentina; In God we trust; We await your return,” said another message, scrawled in large black letters on a flag.

Argentine veterans were among the well-wishers who gathered outside the base on Sunday, a bitterly cold and gusty day in this city, a popular summertime destination. “I think it’s very important to be here to show support for the crew and their family, show them there is a city rooting for their safe return,” said Adolfo Albornoz (79), a veteran of the Falklands War.

Admiral Albornoz said he resented the continued British control of the islands, which Argentina calls the Malvinas, that were the subject of a short war in 1982. “But in this case I’m glad they’re helping out. This is a time to set aside our differences.” – New York Times