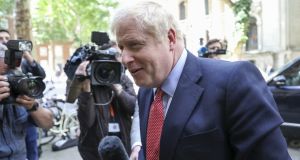 Police were called to the home of Tory leadership contender Boris Johnson and his partner, Carrie Symonds, in the early hours of Friday. File photograph: Chris Ratcliffe/Bloomberg

Police were called to the home of Tory leadership contender Boris Johnson and his partner, Carrie Symonds, in the early hours of Friday after neighbours heard a loud altercation there involving screaming, shouting and banging.

The argument could be heard outside the flat where the favourite in the race to become the next British prime minister is living with Ms Symonds, a former Conservative Party head of press.

A neighbour told the Guardian they heard a woman screaming followed by “slamming and banging”. At one point, Ms Symonds could be heard telling Johnson to “get off me” and “get out of my flat”.

The neighbour said that after becoming concerned they knocked on the door but received no response. “I [was] hoping that someone would answer the door and say: ‘We’re okay.’ I knocked three times and no one came to the door.”

The neighbour decided to call 999. Two police cars and a van arrived within minutes, shortly after midnight, but left after receiving reassurances from both the individuals in the flat that they were safe.

When contacted by the Guardian on Friday, police initially said they had no record of a domestic incident at the address.

But when given the case number and reference number, as well as identification markings of the vehicles that were called out, police issued a statement saying: “At 00:24hrs on Friday, June 21st, police responded to a call from a local resident in [south London]. The caller was concerned for the welfare of a female neighbour.

“Police attended and spoke to all occupants of the address, who were all safe and well. There were no offences or concerns apparent to the officers and there was no cause for police action.”

Ms Symonds was part of the team involved in the launch of Mr Johnson’s leadership campaign.

The couple have increasingly appeared together at public events in recent weeks. The former mayor of London topped Thursday’s ballot of Conservative MPs in the party leadership contest and is now the favourite to be the next prime minister.

The neighbour said they recorded the altercation from inside their flat out of concern for Ms Symonds.

On the recording, heard by the Guardian, Mr Johnson can be heard refusing to leave the flat and telling Ms Symonds to “get off my f**king laptop” before there is a loud crashing noise.

Ms Symonds is heard saying Mr Johnson had ruined a sofa with red wine: “You just don’t care for anything because you’re spoilt. You have no care for money or anything.”

The neighbour said: “There was a smashing sound of what sounded like plates. There was a couple of very loud screams that I’m certain were Carrie and she was shouting to ‘get out’ a lot. She was saying ‘get out of my flat’ and he was saying no. And then there was silence after the screaming. My wife, who was in bed half asleep, had heard a loud bang and the house shook.”

Mr Johnson left his wife, Marina Wheeler, last year and began a relationship with Ms Symonds, who has been credited with revitalising his appearance and approach to politics.

In recent weeks the couple have been sharing a flat in a converted Victorian house. It has been reported that they intend to move into Downing Street together if he is elected leader.

Mr Johnson’s office was contacted earlier on Friday for comment but had not responded by the time of publication. – Guardian