Summit Diary: Juncker notes wryly it appears he’s not that easy to replace 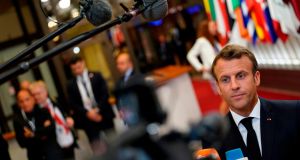 The sun beats down on the limousines purring up the Rue de la Loi. The chukka-chukka of helicopters descends heavily from the skies above the Berlaymont building, vast headquarters of the European Commission.

It’s not about Brexit this time, though. The issue that has dominated every meeting of European leaders for a year or more was a minor item on the agenda this time. Nothing exercises politicians like jobs for politicians and this summit was about picking people for the EU’s top jobs.

The president is chosen by the national leaders on the European Council, but must be approved by the European Parliament

Every five years, with the election of a new European Parliament and the nomination of a new commission, EU leaders must choose who leads the institutions. The most important gig is the presidency of the commission, the civil service and policy engine of the EU, often scrapped over by national governments.

Last time out, British prime minister David Cameron fought a lengthy rearguard action trying to block Jean-Claude Juncker, finally resorting to briefing that the affable Juncker was too fond of guzzling wine at luncheon to be entrusted with such a weighty responsibility. Cameron failed.

The president is chosen by the national leaders on the European Council, but must be approved by the European Parliament. In 2014, the parliament adopted a “lead candidates” system , under which each of the major party groups in the parliament nominate their choice.

It rested on the questionable proposition that when Fine Gael voters in west Kerry were giving Sean Kelly the scratch, they were also signalling their approval of Manfred Weber. But it doesn’t stand up to much scrutiny.

The signs had been on for weeks that Weber – or either of the other two alternatives, the Dutch socialist Franz Timmermans and the Danish liberal Margrethe Vestager – would not get through the European Council. French president Emmanuel Macron, whose influence grows as Angela Merkel’s declines – said he would block them. In Dublin, Leo Varadkar pledged to stick with Weber, still officially the EPP candidate, after all.

One observer summarised that the leaders weren’t even able to agree on what they didn’t agree on. Varadkar grumbled it was easier to elect a pope

But Weber was goosed, and everyone knew it. The formal execution was carried out in the early hours of Friday morning after the leaders’ summit dinner. So they finally shot Weber, The Irish Times inquired of one insider the following morning. They shot them all, was the reply.

Candidates are needed for the other jobs too, with the package requiring a delicate balance of gender, geography and political affiliation. Nobody seems to be mentioning the obvious question: who is the best person for this job? That’s not how it works here.

At 1.44am on Friday , phones around the EU quarter pinged an unwelcome message – press conference in 10 minutes. Bleary-eyed officials and journalists shuffled to the briefing room. You can only drink so much coffee. Juncker complained he was “very tired”. But he wasn’t completely displeased.

“I noted with some pleasure, satisfaction, amusement, happiness even that it appears I’m not that easy to replace,” he deadpanned. One observer summarised that the leaders weren’t even able to agree on what they didn’t agree on. Varadkar grumbled it was easier to elect a pope.

Ultimately, though, Brexit was unavoidable. On his way in to Thursday’s session, Varadkar had revealed a hardening line. At the last summit, the Taoiseach said the EU was a home nobody would ever be thrown out of. Now he said that everyone was losing patience with the British.

Increasingly, European leaders are holding the door for the UK, like a party host long after the last troublesome guest has overstayed his welcome: come on, time to go. We need to tidy up.

There was one summit regular missing from the whole boondoogle: Nigel Farage wasn’t there to add his particular brand of gaiety to the occasion. Theresa May did show up, but nobody paid much attention. Poor May cuts a tragic figure: she has been the worst British prime minister in living memory. The only consolation is that her successor may swiftly wrest that title from her.

The British press corps in Brussels, a jolly lot utterly despairing of their own government, gathered for summit postmortems in the nearby bars. Everyone tells Boris stories before talk inevitably turns to Brexit.

A September crisis is anticipated by all; endless possibilities are considered, but the general view is a no-deal is increasingly likely. What will Varadkar do then, they want to know. Won’t you have to put up a border? It is a question that has been dodged and fudged for a long time. But one conclusion from this summit was unavoidable: that time is coming to an end.