Theresa May rejects call for her resignation from Tory Brexiteers 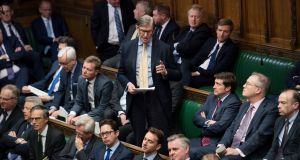 Tory Brexiteer Bill Cash speaking on Thursday in the House of Commons, where he suggested prime minister Theresa May should resign. Photograph: UK Parliament/Jessica Taylor/PA Wire

British prime minister Theresa May has dismissed calls from Conservative Brexiteers for her resignation after she agreed a six-month delay to Brexit with European Union leaders early on Thursday morning.

Mrs May told MPs that she would continue to seek a compromise with Labour that could command a majority in the House of Commons.

She and Jeremy Corbyn met briefly on Thursday and agreed to continue talks “in an effort to make substantive progress” towards finding a compromise plan for Brexit.

“This is not the normal way of British politics – and it is uncomfortable for many in both the government and opposition parties. Reaching an agreement will not be easy, because to be successful it will require both sides to make compromises,” said Mrs May.

“But however challenging it may be politically, I profoundly believe that in this unique situation where the House is deadlocked, it is incumbent on both front benches to seek to work together to deliver what the British people voted for.”

Veteran Eurosceptics Bill Cash and Peter Bone suggested that Mrs May should resign because the extension until October 31st contradicted a promise she made in the House last month not to agree any extension beyond June 30th. DUP deputy leader Nigel Dodds said the prime minister should learn the lessons from this week’s summit, which he claimed marked the EU backing down before the threat of a no-deal Brexit.

“Will she please examine where she is going with all this, learn the lessons, and come back with something that can actually secure a majority in the House?” he said.

Mrs May had a sharp exchange with DUP Brexit spokesman Sammy Wilson, becoming visibly angry when he asked if she could give any example of an EU demand she had resisted. She said one of the demands she had resisted was for a Northern Ireland-only backstop.

MPs left Westminster on Thursday night until after Easter, when the government is expected to make a final effort to win approval for the Brexit deal in time to avoid contesting European Parliament elections on May 23rd.