Brexit: Downing Street warns talks with Labour will not continue ‘for the sake of it’

Prime minister addressed parliament after getting extension until October 31st 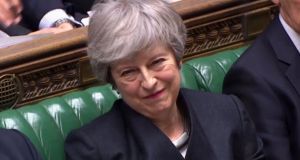 Downing Street has warned talks with Labour to end the Brexit deadlock will not continue “for the sake of it” after EU leaders granted a second delay to Britain’s withdrawal from the bloc.

Theresa May returned to face her critics after another round of late night diplomacy in Brussels saw the EU set a Halloween deadline of October 31 for the UK finally to reach agreement on the terms of its withdrawal.

In the Commons, the Prime Minister brushed off a call to resign from veteran Eurosceptic Sir Bill Cash who described her acceptance of the latest extension to the Article 50 withdrawal process as an “abject surrender”.

However senior Tories warned the pressure on her to go would “increase dramatically” amid frustration among MPs that there is still no certainty as to when Britain will leave.

Mrs May told MPs that under the terms of the extension it was still possible Britain could avoid voting in European elections on May 23rd if Parliament was able to pass a deal before that date.

However, she acknowledged that reaching agreement in talks with Labour “will not be easy” as it would require compromise on both sides, but said that it was in the “national interest” that they should try.

“This is not the normal way of British politics — and it is uncomfortable for many in both the Government and opposition parties,” she said. “But however challenging it may be politically, I profoundly believe that in this unique situation where the House is deadlocked, it is incumbent on both front benches to seek to work together to deliver what the British people voted for.”

Jeremy Corbyn said Labour would continue to engage “constructively” in the negotiations which he described as “serious, detailed and ongoing”, but warned ministers would have to compromise if they were to succeed.

He hit out at what he said was an apparent attempt by International Trade Secretary Liam Fox to “scupper” the talks by trying to rule out a customs union — a key Labour demand.

Mrs May however suggested the two sides were not as far apart on the issue as was sometimes claimed.

“I think there is actually more agreement in relation to a customs union than is often given credit for when different language is used,” she said.

A No 10 source said they would continue to pursue the dialogue as long as they believed it was making progress, but added: “Bluntly, we won’t continue to talk for the sake of it.”

Mrs May said that if they could not agree a single unified approach, they would seek to agree a “small number” of options which they would put to the House for MPs to vote on. “As I have made clear before, the Government stands ready to abide by the decision of the House. But to make this process work, the opposition would need to agree to this too,” she said. Following her Commons statement, Mrs May and Mr Corbyn held a “short meeting” at Westminster when they agreed to continue the talks process, Labour said.

Mrs May told The House of Commons the European Council had reiterated that the Withdrawal Agreement could not be re-opened.

She said: “Crucially, any agreement on the future relationship may involve a number of additions and clarifications to the Political Declaration.”

Mrs May said she had argued against conditions being imposed on the UK during the delay.

The PM said she had made clear that Britain “would continue to be bound by all our ongoing obligations as a member state, including the duty of sincere co-operation”.

Prominent Tory Eurosceptic Sir Bill Cash accused the prime minister of “abject surrender” to the EU and asked if she would resign.

Mrs May replied: “I think you know the answer to that.”

Mr Corbyn said: “The second extension in the space of a fortnight represents not only a diplomatic failure, but it is another milestone in the Government’s mishandling of the entire Brexit process.”

The six-month extension to October 31st was a compromise solution thrashed out by EU leaders after French President Emmanuel Macron dug-in against a longer delay lasting into 2020.

Former Brexit secretary David Davis insisted that no progress had been made in Brussels and that pressure on Mrs May to quit as PM will increase, telling the BBC: “I think what is likely to happen is the pressure for her to go will go up.

“The pressure on her to go will increase dramatically, I suspect, now.”

Commons Leader and prominent Leave backer Andrea Leadsom played down speculation that the latest delay could mean the end of Brexit.

She said: “We have to use this time to make sure that we deliver the Brexit we are all looking for, that we work closely with the EU and that they are genuinely helping to make sure we do deliver on the referendum — there won’t be any changing our minds about that.”

If the UK fails to take part in elections to the European Parliament on May 23-26, it will automatically leave without a deal on June 1st.

A review of progress will take place at the scheduled June 20 European Council summit in Brussels, but Mr Tusk stressed that this would be an opportunity for “taking stock” and not for any new negotiations.

The term of the current European Commission under Jean-Claude Juncker ends on October 31st.

The deal stopped the clock on the UK crashing out of the EU with no deal on Friday.–PA