Assange arrest opens new chapter in his struggle with US 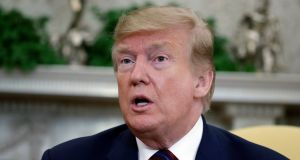 US president Donald Trump speaking on Thursday the White House, where he said: ‘I know nothing about WikiLeaks. It’s not my thing.’ Photograph: Evan Vucci/AP

Almost a decade ago, Julian Assange released a torrent of classified information that laid bare US wars in Iraq and Afghanistan and the secrets of American diplomats worldwide.

On Thursday, the US unveiled its response: an indictment of the WikiLeaks founder – that had been kept under seal for more than a year – on a charge of conspiracy to carry out computer hacking.

The charging of Assange and his expulsion from the Ecuadorean embassy in London, where he had spent the past seven years, has opened a new chapter in the Australian national’s struggle with the US.

It also marked a victory for Donald Trump’s justice department. It had signalled its determination to prosecute Assange in 2017 when Jeff Sessions, then attorney general, said that his capture was a “priority”.

Assange now faces an extradition battle and a possible criminal trial that will reignite a furious debate about the legal boundaries of journalism. It could end with the WikiLeaks founder languishing inside a US federal prison.

His attorney, Barry Pollack, said the allegations amounted only to Assange “encouraging a source to provide him information, and taking efforts to protect the identity of that source”.

“Journalists around the world should be deeply troubled by these unprecedented criminal charges,” said Pollack.

The case against Assange relates to Chelsea Manning, a former US army intelligence analyst who leaked masses of classified information to WikiLeaks in 2010. The material she leaked included a video of two Reuters journalists killed by a US helicopter in Iraq and a huge store of private US diplomatic memos.

Manning was court-martialled and pleaded guilty in 2013. Her sentence was commuted by Barack Obama before he left office in January 2017. She is currently in jail in Virginia for contempt of court after she refused to answer questions before a grand jury about the 2010 leak.

In the seven-page indictment against Assange, prosecutors from the US attorney’s office for the eastern district of Virginia accused him of conspiring with Manning to obtain the classified information and to help crack a defence department password in an effort to hide her tracks.

The indictment was filed under seal in March 2018 and largely kept secret – except for an inadvertent disclosure of charges against Assange in an unrelated case late last year. It is unclear if the grand jury, which is still active, will bring any additional charges.

Robert Mueller, the special counsel who investigated WikiLeaks as part of his probe into Russian interference in the 2016 election, did not ultimately bring any charges against Assange or the organisation before he wrapped up the investigation last month.

Trump had praised WikiLeaks during the 2016 presidential campaign, when it published Democratic emails allegedly hacked by the Russian government to damage his rival, Hillary Clinton. His justice department made clear its desire to prosecute Assange as part of an effort crack down on leaks from inside government.

On Thursday, however, the US president claimed not to know much about Assange’s arrest and said it would be up to the US attorney general, William Barr, to determine the next steps. When asked by reporters if he still loved WikiLeaks, he said: “I know nothing about WikiLeaks. It’s not my thing.”

The Obama administration had declined to indict the WikiLeaks founder after judging that the line between his activities and those of US news organisations was not clear enough. Democrats on Thursday nevertheless welcomed Assange’s arrest.

Mark Warner, the top Democrat on the Senate intelligence committee, pointed to WikiLeaks’ role in the 2016 election, though the charges did not relate to those activities.

The indictment charged Assange with one count of conspiracy to commit computer intrusion, which carries a maximum sentence of five years in prison. It alleged that Assange “encouraged” Manning to hand over information to WikiLeaks.

Prosecutors also said that Assange “agreed to assist Manning in cracking a password” stored on defence department computers. This would have allowed the former army analyst to hide her tracks by logging into computers using a different username.

“If they can show this, then it appears they’ve put together a pretty compelling case,” said Barak Cohen, a former federal prosecutor who worked on cybercrimes cases, referring to the alleged agreement.

He said the absence of an allegation that Assange succeeded in cracking the password did not mean he could not be prosecuted for conspiring to do so.

Cohen, a partner at Perkins Coie, said prosecutors would probably prefer to try to jail Assange for longer than the five-year maximum sentence allowed by the current charge.

“But if this is the best case they can put together, they are probably pursuing it with the goal of making a point, so they can deter other kinds of behaviour like this that they dislike,” he said. – Copyright The Financial Times Limited 2019