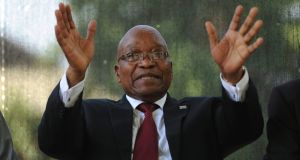 Some of South Africa’s key crime-fighting institutions were seriously weakened over the last decade by the suspension and persecution of senior managers attempting to investigate police corruption, a commission of inquiry has heard.

Robert McBride, former executive director of the Independent Police Investigative Directorate (Ipid), told the inquiry on Thursday there was an attempt to take control of the anti-corruption bodies by installing individuals into their top management roles who would not investigate crimes properly.

Mr McBride said his suspension from Ipid in 2015 – a year after his was appointed – by then police minister Nkosinathi Nhleko, after he was accused of fraudulently altering a report on a rendition investigation, was part of this “silent coup”.

So too, he said, was the removal of former South African Revenue Service acting commissioner Ivan Pillay and the head of the police’s priority crime investigation unit, Anwa Dramat, from their posts in the same year.

After challenging his suspension in court, Mr McBride was reinstated to his role in 2016 when prosecutors conceded there was insufficient evidence to support his suspension.

Mr McBride continued his work as head of Ipid, which provides oversight on the role of South African Police Service officials and investigates accusations against the officers, until last month when his contract was ended.

He is challenging in court the decision taken by parliament’s portfolio committee on police to not renew his contract, saying it was an irrational decision and that the independence of Ipid is again under attack.

During his evidence on Thursday to the Commission of Inquiry into State Capture, Corruption and Fraud in the Public Sector – which was primarily established to investigate if former president Jacob Zuma facilitated government corruption – Mr McBride said his investigators were often stonewalled.

He maintained a “blue curtain” was regularly drawn around the South African police’s crime intelligence unit to protect it from investigation, and that bureaucracy was used to hinder probes into corruption within its ranks.

The police’s crime intelligence division would often declare documents as classified in an attempt to undermine Ipid investigations into allegations of corruption against them, he maintained.

Mr McBride said there was a history of cases in the police crime intelligence unit where there was rampant abuse of the secret service account, and a sense of impunity when it came to the use of this taxpayers’ money. He added that it was only through Ipid’s partnership with the inspector general that his team got access to classified documents, and when they did they found numerous cases of corruption and abuse of police resources.

Mr McBride will continue to give his evidence on Friday. He is expected to implicate up to 50 government officials in corruption and wrongdoing.