Cycling the Border: ‘Northern Ireland is an upturned plug at the foot of British politics’ 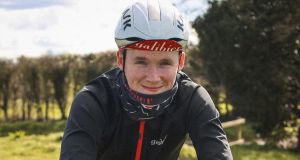 “An Irishman walks into a bar . . .”
I wouldn’t really call myself an Irishman. With a British passport, a harsh accent, and a brutal take on hospitality, I don’t fit the mould of the Irish.

“An Englishman walks into a bar . . .”
Well I’ll never be English . . . 1966 is four years after my father’s birth, and that’s all it is. My childhood centralised around potatoes and ice pops, and all the Queen did for me was get in the way of my Christmas dinner.

History is being made.

Not Theodore Roosevelt remaining unhindered in a 90-minute pitch for American presidency after just being shot in the chest; not Rosa Parks refusing to give up her seat and concede to prejudiced rules of racism, but a Westminster posse churning out years of lies, frustration and deceit, resulting in trivial squabble, before pitching the “Great” out of Britain, and walloping it into the English Channel.

In the midst of it all is my native country, Northern Ireland, seen as an upturned plug at the foot of British politics.

East Belfast is home to many a 12th July swansong with the PSNI; but it is also the place where Van Morrison wished upon “a bluer ocean against tomorrow’s sky”; and where I, a dopey, harmless young boy, went to school, played football with friends, and went from riding my bike around a suburban Belfast street to the top races in Europe.

I’m proud of my cultural identity, even though it is impossible to name it. My homeland is “radically dysfunctional, implacably divided and politically shipwrecked” as Fionola Meredith so aptly puts it, but it’s mine and it’s beautiful, and I am driven to show you every woman is not Arlene Foster, and every man is not Sammy Wilson.

I’m going to show you this place for what it is in my soul: a cycling playground, an emerald art piece, a true feat of mother nature. I would not have the qualities I am proud to possess if I did not grow up, take on and expand on the Northern Ireland that lies in my heart, and the valuable lessons it has gifted me.

The past few months have been dark, drab and doomed.

Divisions have grown in light of the Brexit result. The Englishman now walks in a bar and worries about the United Kingdom leaving the European Union without a deal. The Irishman joins him, complaining of how inconvenient it all is and how powerless they were in a decision that will ultimately disrupt their economy also.

But alas, I am the Northern Irishman. I order the barkeep to get me a Belfast Harp Lager, and in light of all this Brexit bleakness, I provide the entertainment, with the Irish backstop as the subject.

Leaving from my childhood home in Belfast, I will embark upon a 400-mile (640km) route of five days, loosely following the Ulster Way to travel around the perimeter of the Irish north coast, head south over lumpy Sperrin Mountains, and flirt with the counties of Derry and Donegal. The Border, a playful skipping rope, will be travelled both north and south of it, unhindered by Border stoppings, to reach Armagh, then search for the Irish Sea again, letting the Mourne coastline guide me back to brilliant Belfast.

All upon my locomotive norm: the bicycle.

Northern Ireland is not just one big petrol bomb waiting to explode: it is a mythical landscape of green pastures, tremendous mountains, azure seafronts, and golden people. I miss it every time I leave, and revel for it when I come back. Over the next number of weeks, I will take you through feelings, thoughts, and visions of my adventure, and sharing with you how my own little cycling escape helps me deal with the grey clouds of the British exit.

With a tailwind, I’m pushed away from the concrete discord of Belfast in an instant, embarking upon the first day of my adventure around the borders of Northern Ireland.

I’m not alone – my father joins me for the initial jaunt and, with my bike significantly heavier than his, flanked with stuffed panniers for my 640km slog, he sniffs an opportunity. I still remember the secret pride lighting up his face as he beat his own child in club cycling races.

Competition is hot, and we hit Carrickfergus curtly, heading through Whitehead swiftly after. My father has taught me a lot of things, got me out of a lot of holes, but I am still driven to crush him.

He wants to stop in Glenarm for a coffee – I push him to go farther. We’re sailing in a phenomenal tailwind, I want to lengthen his time with gusts on his face when he turns back to head home.

We compromise a stop in Cushendall. Reminiscing of times gone by, he takes us both off the road and back in time . . .

RTÉ 2 is on the verge of its first broadcast in a few months’ time. The to-be UK prime minister comments on being “rather swamped by people of a different culture”. Grease is about to be released, with Andy Gibbs’ Shadow Dancing blaring from everybody’s boombox. Skies are clear, temperatures touch high teens; two leather-bound, DM booted youths zoom up Belfast’s North Queen Street on identical Mondrian-coloured 1976 Malaguti 50cc mopeds. Funk is blocked out by their two-stroke roar.

The RUC Station does not miss them.

Following the pungent, petroleum pathway left in their midst, the many eyes of the towering, fortified barracks keep watch. Hitting a ramp, the leading rider unknowingly drops the stash. One stops, picks up the piece, stashes it in his pocket, then chases after his revving compatriot, now louder than before: suspect number two seems not to miss a beat.

Neither does the force.

Blue, red and rifles from left, right and centre. Nothing is hidden from the suspects’ black leather jackets, not even holstered, metal, objects . . .

Resigned and shaken, suspect number two parts with his piece after a rough search. Driven with purpose and victory, the constable reveals the suspicious protrusion, only to identify a motorbike exhaust silencer.

Angered over the abuse of his own power, he demands yellow full-face helmets are removed, and insurance documents provided.

Under a full-face balaclava, is some jet black hair, and a sun-burnt face: it’s my father as a 16-year-old, just wanting to escape from a war-torn capital into the rural tranquilities of the north coast – for the weekend, at least . . .

Forty miles bring back 40 years. Now cycling on the coast road, the old man’s hair is grey. We roll pass an underage disco he used to frequent. Now it stands unapologetic, a desolate ruin.

He continues to speak of youthful frustration, when Thatcher was not a term for making artisanal roofs, when all dreams were limited to The Man, and how revving the life out of his Malaguti was therapy for it all.

He speaks of fear: not wanting to go out in the dark, khaki checkpoints and tense face-offs during daily commutes, of being caught in the wrong situation.

We arrive in Cushendall and everything is right.

After soup and recoup, we go our separate ways. Castigating him to violent headwinds, I head for my first pit-stop, via the steep steps of Torr Head. Through slog and grind, my mind stays with my father. When he was 16, he saw more firearms on city streets than I have in movies. He grafted to earn his keep, to give me and my brother a place to dream of bigger things.

Reaching Portstewart, I’ve arrived. Growing up watching the NW200, it’s not for the first time I’ve visited. Reflecting on my father and his youth, I wonder if the same can be said for the politics of today . . .