Brexit: In ‘Labour Leave’ heartlands, globalisation is the great enemy 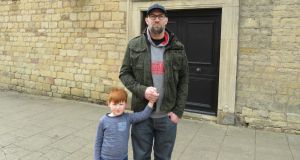 Everyone I speak to ahead of my visit to the “Labour Leave” heartlands of Derbyshire tells me that if I want to understand attitudes to Europe in this area, I need to visit SportsDirect in Shirebrook.

The enormous warehouse – employing 5,000 people, mostly from Eastern Europe – sits on a hill overlooking the pit town, on the site of the colliery which closed down in the early 1990s. These days, it is a sprawling monument to consumerism: 75,000sq ft of sportswear, rucksacks, running shoes, bicycles and clothing in big-name brands.

But for many people here, the site, which is the British headquarters for SportsDirect, has come to represent the worst excesses of globalisation, after investigations in 2015 by Channel 4 and the Guardian accused it of underpaying its mostly migrant workforce.

A Commons Select Committee report was damning of the “appalling work practices” and found that workers were treated as “commodities rather than as human beings”.

“When my grandfather went down the pits with Poles and Lithuanians and Latvians, they were all union workers and they were all under the same wages and working conditions,” and there were no problems with integration, he says. But the workers who come here for jobs in SportsDirect often don’t speak English and, as a result, many don’t integrate into the community.

Seventy per cent of the people in this area voted Leave, but he’s keen to point out that “not every Leaver is a Nigel Farage or a Jacob Rees-Mogg. There are decent people that aren’t xenophobic.”

If there was a referendum now, I would vote Leave. I’m one of the few that has gone the opposite way

Mitchell, now 20, was too young to vote at the time of the referendum, but he would have been in favour of Leave, because he saw the EU as undemocratic. Now, though still pro-Leave, he is relieved at the prospect of a long delay.

“The Irish situation really worries me. For me, there’s a lot of scaremongering in terms of some of the economic arguments, but the Irish border situation, and reopening the Troubles is not scaremongering. You can’t risk the Good Friday Agreement being ripped up to satisfy a very small majority of voters who are no different to Enoch Powell.”

His friend and Labour colleague Ashley Taylor voted Remain, but has changed his mind. “If there was a referendum now, I would vote Leave. I’m one of the few that has gone the opposite way,” Taylor says. But, he adds, he does not want to leave without a deal and is glad of the delay.

The high Leave vote in the area, says Taylor, was a vote against capitalism and globalisation.

“It’s a vote against the establishment. People in the Labour heartlands do still want to trade with the EU. But a lot of people around here feel left behind.”

Trade unionist and Labour party member Nick Clarke says the political landscape has changed in the area in recent years. “That’s to do with the closure of the mines and the changing demographic of the constituency. It’s no longer the solid hardcore mining communities who are voting.”

In the 2017 election, some seats in the former coalfields swung to the Tories, including nearby Mansfield.

Clarke believes “we’re better off being part of the EU where we can influence policy from within, rather than being passive from the outside”, but he accepts that’s a minority view around here.

Whatever happens now, he says, “it’s going to take along long time for the divisions to heal” in society. All three are supportive of the Labour leader Jeremy Corbyn negotiating with Theresa May, even if they don’t hold out much hope for the talks.

An 8km drive through countryside that is the manifestation of Nigel Farage’s English idyll – there are undulating green hills, meadows, cows grazing in pastures alongside stone farmhouses – brings you to Bolsover.

It is a few streets of pretty sandstone buildings housing hair salons, restaurants, takeaways, Polish supermarkets, a dog groomer’s and some picturesque pubs. It is best known for its imposing 17th-century, reputedly haunted castle and the “Beast of Bolsover”, 87-year-old MP Dennis Skinner. Skinner, a lifelong Eurosceptic, has a fearsome reputation, though those in his constituency seem to adore him. “He’s an absolute hero in this area,” Mitchell says.

Making out that the north of England is bigoted, and the south is accepting and cosmopolitan, is not true at all

If the people I meet are representative, there’s been a recent outbreak of, if not cold, then slightly cooler feet on Brexit. “Oh please, no,” one woman says when I ask if I can talk to her about Brexit, as her husband strides off. “His head will explode.”

Tracey Wagstaff, who didn’t vote last time, but wishes she had and would now probably vote Remain, says “people are fed up listening to it”. She is in despair at the idea of another year of this.

Mark Croft, who is picking his son Lukas up from school, voted Leave but insists his vote was nothing to do with race or immigration. “Making out that the north of England is a bigoted area, and the south of England is an accepting and cosmopolitan area is not true at all.” He voted no because “power should be devolved to smaller communities, not to unelected bodies”.

Outside the Cavendish pub, Nicky Cann voted Leave. But now that he knows “all the information”, he’s in favour of Remain, and wants another referendum.

Hoping to meet up with him before I leave, I call Dennis Skinner’s Westminster office. To my surprise, he picks up himself. I tell him that I’m in his constituency because I want to understand the Labour Leave perspective a little bit better.

“How do I know? I can’t read the mind of everybody, otherwise elections would be easy to forecast, wouldn’t they?”

Some of the people I’ve met feel disenfranchised from politics in Westminster, I suggest. This, it turns out, is a mistake. I’m not talking about him specifically, but he is indignant.

“Well, I am a member of Parliament. The fact that I have voted against the common market, and against the EU, and I am the only MP that has voted against every treaty over the years – don’t you think that’s made a difference?”

Has he been frustrated that the negotiations have taken so long? He suggests this is not a very good question. “I don’t know what you’re saying. You just keep rattling on. I haven’t got a clue what you’re talking about.”

Skinner won’t predict what’s going to happen next. “I’m not a Tory member of Parliament. I don’t know what’s in their daft minds, do I? The Tories are the government . . . Cameron expected the results to be the opposite. That’s why he left. He gave them the referendum, and then when it turned out that they voted a different way, he left. It didn’t surprise me. It did him, obviously. So Dodgy Dave left.”

I try a different tack, and ask about the prospect of a return of a hard border to Ireland if no deal is agreed.

“I don’t believe it should happen. They should find a way without having that problem for the Irish people. It’s self-evident I was going to say that, right?”

It was obvious, he says, that “it would create a problem if Northern Ireland, which happens to be part of the United Kingdom, had a different set of rules to the people in the Republic.”

How does he feel about the prospect of Britain participating in European elections? “Well, I took it for granted that the government would be out on March 29th. And for a long time it did look as if that was going to happen. But they’re still arguing.”

So how does he feel now about the likely long delay? This, it seems, is the last straw. Or maybe the past two years have been the last straw. “How do you mean how do I feel?” he shouts. “You keep talking to me as if I’m wafting in the wind . . . Haven’t I just explained to you again and again that I have always been against the principle of the European common market and the European Union? Can’t you understand that?”

I apologise again, and try another question, but he has had enough. “Have you finished?” he barks.