German chancellor Angela Merkel said that, "for 34 years I lived behind the Iron Curtain so I know only too well what it means once borders vanish, once walls fall" after her meeting on Brexit with Taoiseach Leo Varadkar Dublin. 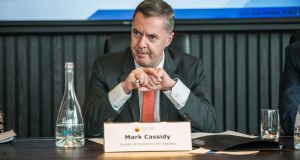 The Central Bank is predicting sterling will drop in value to near-parity with the euro in the event of a no-deal Brexit, heaping further pain on Irish exporters.

In its latest quarterly bulletin, the bank forecasts sterling will weaken by a further 10 per cent if the UK crashes out of the EU without a deal, to trade at about 97p against the euro.

Employers’ group Ibec and others have warned that this rate of exchange would result in significant business closures here with small UK-reliant firms with limited credit lines seen as the most vulnerable.

The UK currency has in recent weeks been trading between 85p and 88p against the euro on hopes that a no-deal Brexit scenario can be avoided. Prior to the UK referendum on EU membership in 2016, it was trading at 77p against the euro.

“The no-deal scenario involves a further 10 per cent depreciation of sterling, bringing it up 96-97 pence per euro,” Central Bank director of economics and statistics Mark Cassidy said. Conversely, a favourable Brexit outcome would see a moderate strengthening in sterling, he said.

In its latest economic commentary, the Central Bank downgraded its headline growth forecast for the Irish economy from 4.4 per cent to 4.2 per cent this year, citing “heightened levels of risk and uncertainty due to Brexit and a less favourable global outlook”. The forecast, which sees growth moderating to 3.6 per cent next year, assumes a Brexit deal is reached and a transition period comes into effect until the end of 2020.

If agreement on Brexit is reached, the Central Bank said, the outlook for growth here remains positive, albeit subject to some uncertainty internationally given the slowdown in activity across the euro zone and heightened trade tensions between the US and China.

The Central Bank repeated its warning that – in the event of a disorderly, no-deal Brexit, with a significant hit to Irish trade – headline growth here could be cut by about four percentage points in the first year and by a further two percentage points the following year.

Most of the hit would come from a disruption to bilateral trade with the UK, which also incorporates the predicted depreciation in sterling. This worst-case scenario would still see the Irish economy grow by 1 per cent in 2019 and by 1.5 per cent in 2020.

The bank, however, warned its no-deal forecasts may underestimate the full impact of Brexit on the Irish economy as it represents such an “unprecedented” shift in trading relations.

While headline growth in the Irish economy is set to moderate, the Central Bank predicted average wages here would rise by more than 7 per cent over the next two years – by 3.6 per cent in 2019 and 3.7 per cent in 2020 – giving Irish workers here their biggest pay rise in more than 10 years.

However, it cautioned pay rises would more pronounced in sectors facing a shortage of skilled workers, such as the financial services and IT sectors, and less pronounced in other sectors such as retail, accommodation and food services.