Lara Marlowe: After the longest journey of my life, I am now a French citizen

The process was Kafkaesque, but I now cannot wait to vote as Citoyenne Marlowe 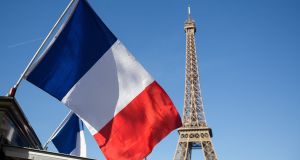 ‘I sometimes joke I must have been French in a previous life, probably in 19th-century Paris.’ Photograph: Simon Dawson/Bloomberg

I completed the longest journey of my life on Thursday, in a functional room on the third floor of an annex of the Préfecture de Paris. There were 70 of us newly minted citizens, from dozens of countries and five continents.

Each of us was given a blue, white and red folder containing a letter from president Macron, a certificate of naturalisation signed by the prime minister, a French birth certificate, excerpts from the 1958 Constitution, the 1789 Declaration of the Rights of Man and the words of the national anthem.

A man with the title of director in charge of integration told us, “I fully measure your emotion which I share.” He quoted Albert Camus, “The French language is my country.”

I took my first French lesson at the age of seven. These many decades later, hearing and speaking French, reading and writing French, is still a joy to me.

Walking home one recent evening, I discovered this quote on the base of the statue of the philosopher Montaigne, across the street from the Sorbonne. “Paris has my heart since childhood. I am French because of this great city... the glory of France and one of the most noble ornaments of the world.” Forty-three years after I first set foot in Paris, its beauty still speaks to me.

As French citizens, we were admonished to respect not only the laws of the Republic, but also, in the words of the Enlightenment thinker Montesquieu, “the spirit of the laws”. France “is a project, a determination, a movement and an aspiration to the universal”, the director of integration told us. “Welcome to our beautiful nation.”

The official recalled our illustrious, naturalised predecessors, from my favourite poet, Guillaume Apollinaire, to Marie Curie, the only woman to have won the Nobel Prize twice, and my US compatriot Josephine Baker.

Participants in Thursday’s ceremony came from South Korea, Vietnam, Cameroon, Ivory Coast, Senegal, Argentina, Venezuela, Algeria, Egypt, Syria and Turkey. At least five came from EU countries, including the UK. This is the generous France that I love.

According to the statistics institute Insee, 114,274 people were naturalised in 2017. If one counts immigrants and their children, close to 20 per cent of the population are of foreign origin.

The process of naturalisation, which I first undertook in 2003, was so long that I often grew discouraged

The ceremony ended in song. The scene in the Hollywood movie Casablanca, when a Resistance hero leads the habitués of Rick’s Café in a defiant rendition of La Marseillaise, in front of German occupation officers, has always brought tears to my eyes. On Thursday, I made it to the last verse before my throat caught and my best friend hugged me.

The mood was cheerful, almost giddy. I chatted with a young Moroccan woman working in cyber security, and an elderly Algerian woman who was visibly moved. We laughed when we called each other compatriot. We queued to have our photos taken beside the bust of Marianne, symbol of France.

My French journey started at the age of five, when my mother brought a small bronze Eiffel Tower and a scarf emblazoned with the monuments of Paris back to southern California. I have moved to Paris six times, most recently in 2013. Five times I left and longed to return.

The process of naturalisation, which I first undertook in 2003, was so long that I often grew discouraged. A Kafkaesque bureaucracy demanded sworn translations of virtually every civil document pertaining to my life, starting with my parents’ birth certificates and including clean police records from every place I have lived, diplomas, bank statements, deeds and tax returns.

The drop of French blood in my veins is not enough to explain my lifelong fascination. I sometimes joke that I must have been French in a previous life, probably in 19th-century Paris. I have acquired French qualities and flaws, as if by osmosis. Permanent dissatisfaction is the downside of perfectionism and a highly developed sense of aesthetics. Like my compatriots, I have a tendency to complicate things.

The French tricolour and the blue and gold European banner flanked the bust of Marianne. “You are also gaining citizenship of Europe, ” the director of integration told us. Becoming European is the best way I know of loving Ireland too, en même temps, as president Macron would say.

Voting, we were told on Thursday, is both a right and a duty. My first act as a French citizen was to register to vote. I cannot wait to cast my first ballot as Citoyenne Marlowe in the European elections on May 26th.