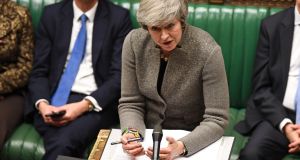 Theresa May answers questions after making a statement to the House of Commons on Monday. Photograph: Getty Images

Theresa May met her cabinet members on Tuesday to consider ramping up no-deal preparations with little more than 100 days to go to Brexit, having effectively dared Jeremy Corbyn to try to bring down her Government.

Downing Street accused the Labour leader of a political “stunt” after he tabled a long-threatened but non-binding motion of no confidence in the prime minister, demanding she hold a meaningful vote on the Withdrawal Agreement before Christmas.

But the Labour leader stopped short of bringing a motion of no confidence in the government under the fixed-term parliaments act (FTPA) which, if the opposition won, could trigger a general election.

Mrs May looked likely to win a vote after Brexiteer critics in her own party and the DUP said they would back her.

But the Government would also have to allow Commons time for the confidence vote to take place this week and a Downing Street source challenged Labour to strengthen its attack.

They said: “We won’t allow time for what is a stunt.

“The FTPA applies if Labour wants to put down a motion under the terms of that.”

Communities secretary James Brokenshire said the weekly meeting of the cabinet would look at stepping up preparations for a no-deal Brexit in case Mrs May’s plan is rejected by MPs.

“We have been taking (the prospect of) no deal seriously for quite some considerable period,” he told BBC Radio 4’s Today programme.

“It’s not what we want to do, it’s not what we still expect to do — because we want to see the deal secured, the vote through parliament — but I think it is right and proper that we maintain our work on preparing for a no deal, however reluctantly.”

He would not be drawn on whether the cabinet would make a no-deal Brexit its “central planning assumption”, stressing that “clearly it’s not something the government wants to see”.

He added: “There will clearly be consequences of a no deal in the short-term.

“That’s why we have been doing a lot of work in relation to, for example, the Channel ports, why we have issued 106 technical notices now, why we are recruiting another 300 people for Border Force.”

The prime minister had said the Commons would have the chance to debate her withdrawal agreement in the week MPs return to Westminster after Christmas on January 7th.

The crucial vote — which was postponed earlier this month to avoid a heavy defeat — will take place the following week.

Mr Corbyn told Mrs May: “A responsible prime minister would, for the good of this country, put this deal before the house this week so we could move on from this government’s disastrous negotiation.”

He said it was “unacceptable” to delay the vote and confirmed he was tabling a motion “that this house has no confidence in the prime minister”.

The wording of the motion, targeted at Mrs May rather than the Government as a whole, would not trigger the process set out under the fixed-term parliaments act which could eventually lead to a general election.

But Labour said it was clearly a confidence motion and should be allocated time for debate by the Government.

A House of Commons spokesman said: “By established convention the Government always accedes to the demand from the leader of the opposition to allot a day for the discussion of a motion tabled by the official opposition which, in the government’s view, would have the effect of testing the confidence of the house.

“It will be for the Government to determine whether to schedule time for debate on this.”

After Downing Street said it would not allow time for a vote on the PM, Labour Party chairman Ian Lavery accused Theresa May of “running scared of Jeremy Corbyn’s no confidence vote, just as she’s running scared of the vote on her flawed Brexit deal”.

Shadow housing secretary John Healey said a full motion of no confidence would be tabled “when it’s clear to the country the government has failed decisively”.

“It is still a question of when, not if, we move to confront the government with a full vote of no confidence,” he told BBC Radio 4’s Today programme.

The SNP, Liberal Democrats, Plaid Cymru and the Green Party have backed the change, laid down on Monday night to trigger the legally binding FTPA provisions.

Meanwhile, a group of more than 50 business figures have called on the PM to back a second referendum to break the deadlock if she cannot persuade MPs to back her Brexit deal when the vote takes place next month.

Senior figures in the City including Sir Richard Sykes, the chairman of Imperial College Healthcare NHS Trust, and former Marks and Spencer chairman Lord Myners, have signed a letter, published in the Daily Telegraph, which suggests her deal is “impossible to resuscitate” and urges her to “take (it) to the British people”. – PA