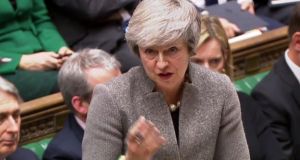 British prime minister Theresa May made the pledge immediately after Labour promised to push for a no-confidence vote in the prime minister if she failed to name a date. Photograph: HO / PRU / AFP

Jeremy Corbyn has tabled a motion of no-confidence in Theresa May after she told MPs they will be able to vote on her Brexit deal in the week of January 14th. The Labour leader said it was unacceptable for the prime minister to delay the vote, which was due to be held last week, by another month.

He accused the prime minister of leading Britain into a national crisis with her Brexit plan, which he said no longer commanded the support of her entire cabinet.

“The prime minister ran away from putting her deal before Parliament because even her own cabinet has doubts and she herself admits Parliament won’t back it. So we are left edging closer to the 29th March deadline without a deal and without even an agreed plan in cabinet to get a deal. The prime minister has cynically run down the clock trying to manoeuvre Parliament into a choice between two unacceptable outcomes: her deal and no deal,” he said.

Mr Corbyn’s motion of no confidence is in the prime minister herself rather than in the government and has no constitutional significance. But it could offer the DUP and some Conservative Brexiteers an opportunity to embarrass the prime minister without risking a general election.

Mrs May said that she remained confident of winning reassurances from the European Union that will enable it to pass. She said she had already won assurances about the Northern Ireland backstop at last week’s European Council, despite what she called “robust” exchanges with other leaders.

In a statement to the House of Commons about last week’s summit, the prime minister pointed to official conclusions of the meeting promising to seek to avoid triggering the backstop and to ensure it only lasts a short time if it comes into operation.

“In these conclusions, in their statements at the Council and in their private meetings with me, my fellow EU leaders could not have been clearer - they do not want to use this backstop. They want to agree the best possible future relationship with us. There is no plot to keep us in the backstop,” she said.

“Indeed, President Macron said on Friday - “we can clarify and reassure…the backstop is not our objective, it is not a durable solution and nobody is trying to lock the UK into the backstop.” As formal conclusions from a European Council, these commitments have legal status and should be welcomed. They go further than the EU has ever done previously in trying to address the concerns of this House.”

Mrs May on Monday restated her opposition to a second referendum on Brexit, which she argued would break faith with the people who voted to leave the EU in 2016. But she is under growing pressure from within her own government to consider alternatives if, as expected, MPs reject her deal next month.

Business secretary Greg Clark on Monday became the latest cabinet minister to suggest that, if the deal failed, MPs should be given a free vote for a series of “indicative votes” on different options for Brexit. The prime minister did not endorse the proposal but responding to a question about what would happen if her deal is rejected, she appeared to acknowledge that MPs could determine the course of events.