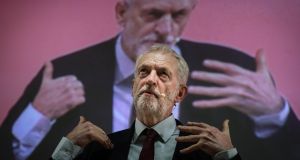 British Labour Party leader Jeremy Corbyn’s move does not shift the party closer to a position of advocating a second referendum, as many of its anti-Brexit supporters would like. File photograph: Mario Cruz/EPA

Jeremy Corbyn’s motion of no confidence in Theresa May will give MPs an opportunity this week to register their displeasure at her refusal to put her Brexit deal to a vote before Christmas. If the DUP and some Conservative Brexiteers take the bait, it will provide another embarrassment for the prime minister.

But it is not a vote of no confidence in the government and it cannot oblige May to bring forward the vote on her Brexit deal from the date in mid-January she announced in the House of Commons on Monday. Nor does it move Labour closer to a position of advocating a second referendum, as many of the party’s anti-Brexit supporters would like.

The prime minister gave an improbably upbeat account of last week’s summit in Brussels, when other EU leaders rejected her call for legally binding assurances that the Northern Ireland backstop would be temporary. And she made clear that she still believes she can extract from the EU the reassurances she needs to win a majority for her deal in parliament.

Her confidence is not shared by all her cabinet colleagues and some of them, emboldened perhaps by the prime minister’s loss of authority after last week’s confidence vote, have started musing in public about what should happen if her deal is rejected. Business secretary Greg Clark on Monday followed work and pensions secretary Amber Rudd and education secretary Damian Hinds in endorsing a series of “indicative votes” on Brexit options.

This would give MPs a free vote on a succession of options, probably including May’s deal, “Norway plus”, no deal, and a second referendum to test the mood of the House. The last time such a process was used was in 2003 when Tony Blair allowed MPs to vote on seven options for reforming the House of Lords.

The options proposed by a joint committee of MPs and peers ranged from a fully elected house to a fully appointed house, with five different combinations of the two in between. But MPs rejected all seven options, prompting the late Robin Cook, who was leader of the house, to tell them:

“We should go home and sleep on this interesting position. That is the most sensible thing that anyone can say in the circumstances. As the right hon gentleman knows, the next stage in the process is for the joint committee to consider the votes in both houses. Heaven help the members of the committee, because they will need it.”

With MPs in both main parties divided a number of ways on Brexit, there is every possibility that a succession of indicative votes next month will prove just as inconclusive.